On the basis of extensive data analysis and field surveillance, intelligence was developed by DRI that certain consignments being imported from Iran were likely to contain narcotic drugs. 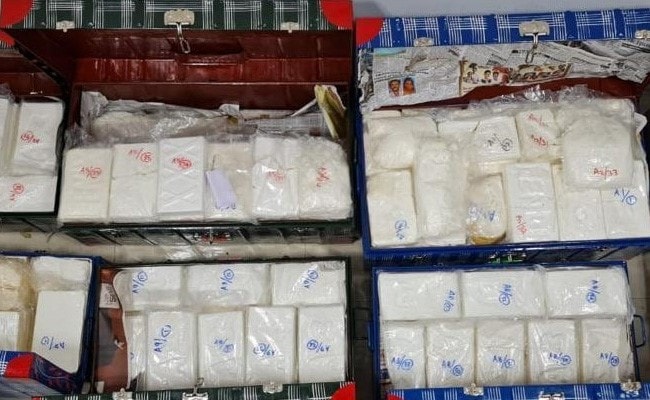 Samples were drawn from those suspected bags and testing was conducted by officials.

The Directorate of Revenue Intelligence (DRI) has seized 52 kg of cocaine, estimated to be valued at over Rs 500 crore in the international illicit market, from an import consignment received from Iran, the Union Finance Ministry said on Thursday.

On the basis of extensive data analysis and field surveillance, intelligence was developed by DRI that certain consignments being imported from Iran were likely to contain narcotic drugs. In order to interdict the narcotic drugs, "Operation Namkeen" was launched by DRI and a consignment declared to contain 1,000 bags of common salt having a gross weight of 25 MT, which had been imported at Mundra port from Iran, was identified for detailed examination, the ministry said in a statement.

"Acting on the above intelligence, the said consignment was examined for three continuous days - from 24th to 26th May 2022. During the examination, some bags were found to be suspicious, as a substance in powder form having distinct smell was found in these bags," it said.

Samples were drawn from those suspected bags and testing was conducted by officials of the Directorate of Forensic Sciences, Government of Gujarat. The testing confirmed the presence of cocaine in these samples. Thus far, 52 kg of Cocaine has been recovered by DRI. Examination and seizure proceedings under the provisions of the NDPS Act, 1985 are in progress. Roles of various persons involved in the said import consignment are also being investigated by DRI, the ministry said.

In the fiscal year 2021-22, during its operations across the country, DRI had seized 321 kg of cocaine, which is valued at over Rs 3,200 crore in the international illicit market.

In the last month, DRI has booked some significant cases, including recoveries of 205 kg of heroin from a commercial import consignment of gypsum powder at the Kandla port, 395 kg of yarn-laced with heroin at Pipavav port, 62 kg heroin at Air Cargo Complex, IGI New Delhi and 218 kg of heroin off the coast of Lakshadweep Islands (in a joint operation with Indian Coast Guard).

In addition, 61.5 kg of gold has been seized from Air Cargo Complex, IGI New Delhi in a novel modus operandi involving concealment of high purity gold in triangle valves of metal taps.