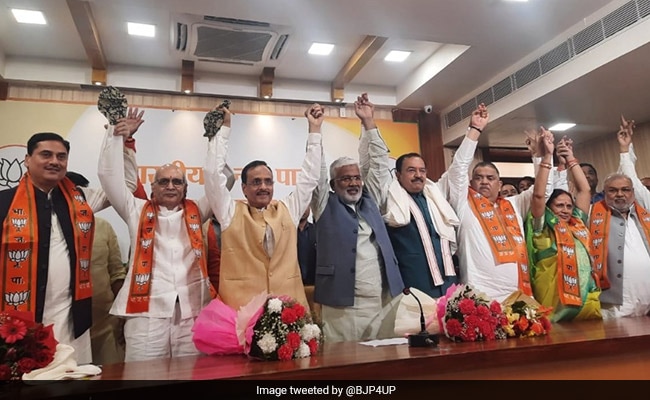 The Samajwadi Party has 48 MLCs followed by the BJP with 36 MLCs.

In a boost for the Uttar Pradesh BJP ahead of the 2022 Assembly polls, four sitting MLCs of the SP joined the BJP on Wednesday.

In a tweet in Hindi, the state unit of the Bharatiya Janata Party (BJP) said, "Influenced by the various public welfare policies of the BJP, four SP MLCs have joined the BJP."

Swatantra Dev Singh in a tweet in Hindi said the four MLCs were impressed by the welfare policies of Prime Minister Narendra Modi and Uttar Pradesh Chief Minister Yogi Adityanath.

Speaking to reporters, Ravi Shankar Singh said he wanted to join the party ever since Neeraj Shekhar, son of former prime minister Chandra Shekhar, resigned from the Samajwadi Party and as Rajya Sabha member in July 2019 and joined the BJP.

Ravi Shankar Singh is the grandson of Chandra Shekhar.

"One of the reasons for joining the party was that Neeraj Shekhar was denied ticket by the SP after which he joined the BJP. I had the intention of joining the BJP almost one-and-half-years ago when Neeraj had quit. Another reason is that I am influenced by Modi ji and Yogi ji," Ravi Shankar Singh said.

It was on an SP ticket that Neeraj Shekhar had won the Lok Sabha election from Ballia in 2007, which was held after his father -- the sitting MP -- died, and again in 2009. After he lost in 2014, the SP sent him to Rajya Sabha. He was not fielded by the party in the 2019 Lok Sabha poll.

On the challenges being faced by the ruling BJP, especially those posed by the SP and Suheldev Bharatiya Samaj Party, Ravi Shankar Singh said SBSP chief Om Prakash Rajbhar will not have any impact on the BJP's prospects in the upcoming poll.

"After joining hands with the BJP, he (Rajbhar) earned money and strengthened himself," Ravi Shankar Singh said referring to Mr Rajbhar's tenure as a minister in the Yogi Adityanath government.

Meanwhile, Narendra Bhati had landed in a controversy in August 2013 after a video purportedly showed him as claiming that he got IAS officer Durga Shakti Nagpal, who had clamped down on the mining mafia, transferred in 41 minutes.

According to the official website of the 100-member Uttar Pradesh Legislative Council, the SP has 48 MLCs followed by the BJP with 36 MLCs and the Bahujan Samaj Party with six MLCs.