Nearly 150 fire personnel carried out the rescue operation and pulled out 63 people from the building. 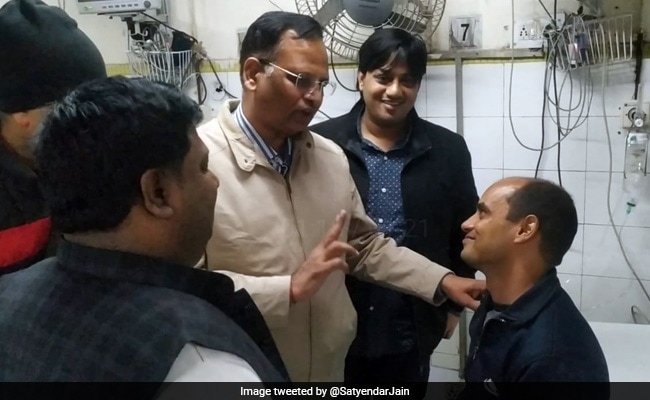 Satyendar Jain visited fireman Rajesh Shukla at the hospital, praised him for his efforts

Two Delhi Fire Service personnel, who were injured while carrying out the rescue work at a four-storeyed building where a massive fire broke out, were discharged from a city hospital on Monday, doctors said.

Rajesh Shukla was one of the first firemen to enter the blazing building on Sunday morning and saved 11 people.

Mr Shukla injured his legs in the rescue operation and was admitted to the LNJP Hospital.

Another fireman had received minor injury during rescue operation and was also admitted to the hospital.

"Both firemen were today discharged. They had not suffered burn injuries though, and had inhaled noxious gases too, so were kept under observation," LNJP Hospital Medical Superintendent Dr Kishore Singh told PTI.

Delhi Home Minister Satyendra Jain had met Mr Shukla at the hospital and praised him for his efforts.

"Fireman Rajesh Shukla is a real hero. He was the first fireman to entered the fire spot and he saved around 11 lives. He did his job till the end despite of his bone injuries. Salute to this brave hero. (sic)," Mr Jain tweeted on Sunday after meeting him.

A massive fire broke out at a factory in the Anaj Mandi area of north Delhi on Sunday morning, leaving 43 labourers dead and many others injured, police said.

Nearly 150 fire personnel carried out the rescue operation and pulled out 63 people from the building.