1 Year Jail For UP Minister Who Fled From Court, Gets Immediate Bail

After being convicted in the Arms Act case of 1991 on Saturday, Rakesh Sachan who had "disappeared" from the courtroom allegedly with the conviction order, on Monday surrendered before the court. 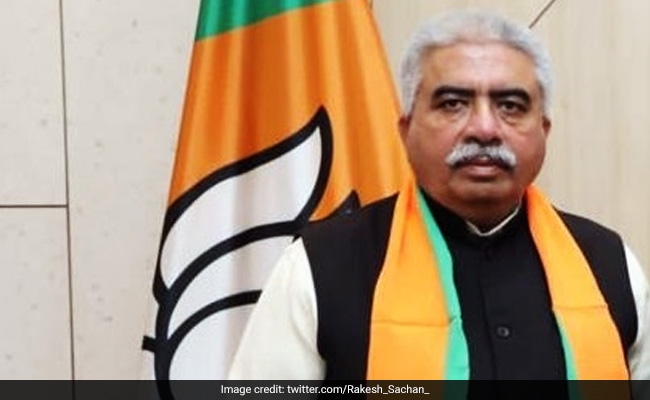 Rakesh Sachan was convicted in the Arms Act case of 1991 on Saturday.

A district court on Monday sentenced Uttar Pradesh minister Rakesh Sachan to one year of imprisonment in an over three-decade-old Arms Act case.

The minister, however, got bail immediately in the case, officials said.

After being convicted in the Arms Act case of 1991 on Saturday, Rakesh Sachan who had "disappeared" from the courtroom allegedly with the conviction order, on Monday surrendered before the court of additional chief metropolitan magistrate-3.

A panel of lawyers on Monday came to the court with Rakesh Sachan, who holds the portfolio of micro small and medium enterprises, khadi and villages industries, sericulture industries, handloom and textile in the Yogi Adityanath government.

After the (surrender) procedure was complete, the court sentenced the UP minister to one year of imprisonment in an Arms Act case, and also imposed a fine of Rs 1,500 on him, prosecution officer Richa Gupta said.

Rakesh Sachan had joined the BJP after leaving the Congress before the assembly polls earlier this year.

Talking to PTI over phone, prosecution officer Ms Gupta said that Rakesh Sachan reached the court along with several senior lawyers around 2 pm, after which the court began its proceedings.

The court delivered its verdict apprising the minister that he has been convicted in the Arms Act case and asked the defence counsels and prosecution to make arguments over quantum of punishment in the case, she said, adding after arguments, the court pronounced the judgement.

Rakesh Sachan was also granted bail on a bond and asked to furnish a couple of sureties each of Rs 20,000.

He had entered politics in the early 90s, joining the Samajwadi Party. In 1993 and 2002, he was elected an MLA from the Ghatampur assembly seat before winning parliamentary elections in 2009 from the Fatehpur Lok Sabha seat.

Ms Gupta said in 1991, police had recovered an illegal firearm from Rakesh Sachan and registered a case.

The court has given 15 days for making an appeal in the session court, she said, confirming that the minister has completed the legal formalities and furnished the bail bonds with sureties.

Meanwhile, Rakesh Sachan's lawyer Kapildeep Sachan told PTI, "We have received the copy of the judgement. It is being studied, and we will file an appeal in the session court soon." A "preliminary inquiry" was launched into the "disappearance" of the minister from the courtroom here "without furnishing bail bonds" after being convicted in the case.

On Sunday, Police Commissioner BP Jogdand said that Assistant Commissioner of Police (Kotwali) Ashok Kumar Singh was asked to inquire into the charges levelled against the minister in a police complaint before an FIR is lodged.

The minister, however, denied the "disappearance" charge, claiming his case "wasn't listed for the final verdict".

On Saturday night, the reader of the court submitted a complaint to the Kotwali police station against Rakesh Sachan, said a senior police official.

The complaint stated that the court's Arms Act case file related to minister Rakesh Sachan was in his advocate's possession when he took some papers, including the order sheet and the conviction order, and suddenly "disappeared" from the court, the official added.

Prosecution officer Ms Gupta said Rakesh Sachan left the courtroom soon after his conviction when the court asked the defence counsel to make arguments over the quantum of punishment.

Rakesh Sachan went away "without furnishing bail bonds" and an FIR would be lodged against him in this regard, Gupta had said. Rakesh Sachan "fled" with the court's conviction order, which was given to him for putting his signature, a senior official had said.

The decision to register an FIR against the minister was taken after a marathon meeting with senior judicial officials believing that letting him off without action might land the presiding officer in trouble, the official added.

Interacting with media persons in Kanpur Dehat later on Saturday, Rakesh Sachan denied the charge of leaving the courtroom clandestinely. Admitting that he had gone to the court for some work, the minister claimed that his case "wasn't listed for the final verdict".