Navratri 2017: Why You Cannot Have Onion and Garlic During Navratri Festivities in India have commenced and we can't be more excited. The first in the line-up of festivals is Navratri which began on 21st September 2017 and will go on for 9 days till 29th September 2017. Navratri is regarded as the most significant of all the four Navratris commemorated in a year as per Hindu belief. It is celebrated in the holy month of Ashwin, and is also known as Maha Navaratri. Devotees worship the nine forms of Durga also called the Nav Durga during this period with plenty of offerings and bhog and observe special fasts to seek her blessings.

It is believed that during these 9 days, Goddess Durga descends from the heavens above and takes shelter amongst her devotees to bless them with strength, power and prosperity. During the Navratri fasts, people follow a strict vegetarian diet and refrain from consuming certain foods like cereals, grains, non-vegetarian food, regular salt and alcohol. They prepare their daily meals with vrat ingredients like Singhara atta, buckwheat flour, sabudana, fresh fruits, sendha namak and samak ke chaawal. If you happen to observe these ritualistic fasts, or know someone who is keeping them, you may know of the practice of not including onions and garlic in the special Vrat ka Khana or fasting meal. In fact, people who do not observe these fasts also refrain from consuming onion, garlic, non-vegetarian food and alcohol during the nine days of Navratri.

Promoted
Listen to the latest songs, only on JioSaavn.com
But, do you know why you are told to avoid onion and garlic even though they are categorised as vegetarian foods? Let's find out. 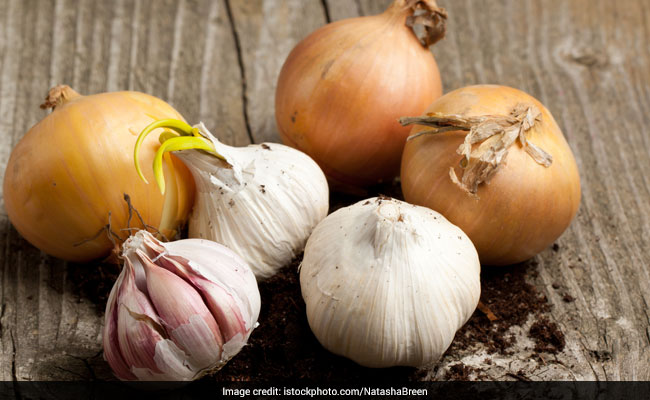 Onion and garlic are avoided during navratri fasting

According to Hindu and ancient Ayurvedic understanding, foods can be divided into three categories, depending upon their nature and the response they trigger in the body after consumption. These three categories are as follows.

While fasting for Navratri, people opt to go for saatvik food. Besides the religious aspect, there is a scientific reason for this too. Sharad Navratri falls around the months of October-November which usually mark the transition period from autumn to winter. During this time of seasonal change, our immunity tends to decline and therefore, it helps to switch to light saatvik food that does not burden your digestive system. It may also help in keeping away from toxins that may breed in greasy, heavy or unhealthy food, and thus, cleanses your body of all impurities.

The word Saatvik comes from the word, Sattva - which means the one that is pure, natural, vital, energetic, clean and conscious. Saatvik foods include most of your vrat ingredients like fresh fruits, cooling curd, pure rock salt, seasonal vegetables like pumpkin and lauki and subtle spices like cumin, coriander and black pepper. On the other hand, the words 'Rajas' and 'Tamas' refer to something that is destructive, resentful, unripe and weak. During this period of Navratri fasting when you are supposed to denounce worldly pleasures and adopt a simple and pure state of life to show your devotion, it is believed that Raajasic and Taamasic food may distract your mental focus.

Onion and garlic are categorized as Taamasic in nature, and have been linked to invoke carnal energies in the body. Onions are also said to produce heat in the body. Therefore, they are avoided during the Navratri fasts. Onion along with garlic is also known as 'Rajogini' that refers to substances that make one lose grip over their instincts, making it difficult to distinguish between your desires and priorities.

Ancient Vedic texts also regard salty, spicy, strong and pungent foods to take away one's focus from the devotion of the Lord. According to Vaishnav tradition, people are weary of eating anything that grows underground and therefore, Vaishnav-Hindus particularly refrain from eating onions. Along with onion and garlic, there are a few spices too that are avoided during Navratri fasting like turmeric (haldi), asafoetida (hing), mustard (sarson or rai), fenugreek seeds (methi dana) and garam masala. You can use Cumin (jeera), green chillies, black pepper and ajwain instead to flavour your food.