Bobby Deol attached a photo along with the birthday note 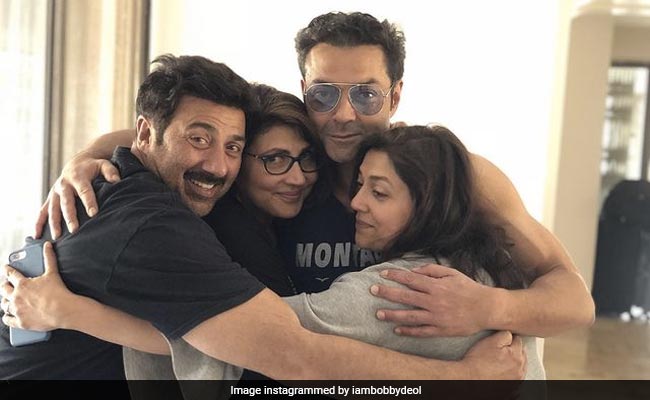 Birthday alert. Actor Sunny Deol turns a year older today and fans and followers of the star are leaving no stone unturned to make him feel special on the big day. The first on the list of such well-wishers is Sunny Deol's younger brother, actor Bobby Deol. Sharing a post on Instagram, Bobby Deol wrote, “Happy birthday, bhaiya, you mean the world to me,” followed by a plethora of heart emojis. The picture attached to the note is one that screams sibling love and features Sunny Deol and Bobby Deol along with their sisters Ajeita Deol and Vijeta Deol huddled together in a warm hug.

Fans were elated to see the sibling revelry and flooded the comment section with hearts and cake emojis. Replying to the image, actor Darshan Kumaar wrote, “Happy birthday, Sunny sir.”

Bobby Deol's Instagram timeline can be described as a love letter to his family, with numerous photos and videos of his close ones. Just a few days ago, on the occasion of his mother Parkash Kaur's birthday, the actor posted a selfie with her. “Happy birthday, mom. Love You,” his note read.

To this, Bobby Deol added, “Love you, Papa. And, yes 9144 is not a car but a beautiful symbol of the journey that has brought us so far. Many many beautiful memories are anchored in there.”

Our favourite image, however, has to be this picture where Dharmendra is flanked by Sunny Deol and Bobby Deol on either side. “Festivals are extra special jab saath hon Apne,” Bobby Deol wrote hinting at the possibility of the sequel to their hit film Apne.

On the work front, Bobby Deol has had a successful few years with shows such as Aashram, and the film Class of 83. Birthday boy Sunny Deol, made his debut with Betaab in 1983. He has several popular films to his credit including Arjun, Tridev, Darr and Gadar: Ek Prem Katha. He was last seen in the film Blank.