Why Mahira Khan, Back On Set, Is "Hating The New Normal"

"Feels surreal to be back on set after so many months," wrote Mahira Khan 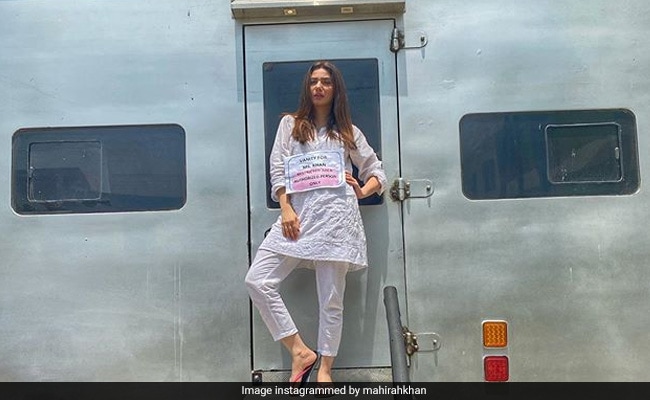 You may be in a TGIF mood but actress Mahira Khan just can't stay away from work anymore. She marked her return to film sets with an Instagram post on Friday and said that she is not at all okay with the "new normal", owing to the coronavirus pandemic. Mahira shared a photo from right outside her vanity van - dressed in all white, Mahira swapped a neckpiece for a notice, which says: "Restricted area, authorised person only." Mahira, who is practising social distancing like all of us, wrote about her excitement over being on sets and also added that because she's a "hugger", she's finding the new arrangements a bit too strange. "Feels surreal to be back on set after so many months. Oh but to be able to face a camera again... even if it's for a short bit... bliss. PS - the hugger in me is hating the new normal," read Mahira's post.

Feels surreal to be back on set after so many months. Ohh but to be able to face a camera again.. even if it's for a short bit - bliss🩰 P.S the hugger in me is hating the new normal' 🤷🏻‍♀️

Mahira Khan made her Bollywood debut with Shah Rukh Khan's 2017 film Raees. The Pakistani TV show Humsafar, also featuring actor Fawad Khan, which aired between 2011 and 2012, made her popular in India. She has also starred in popular TV shows such as Shehr-e-Zaat and Bin Roye. Last seen in Pakistani film Superstar, Mahira's next movie is The Legend Of Maula Jatt. Mahira Khan is a single mother to son Azlan, who will turn 11 this year.