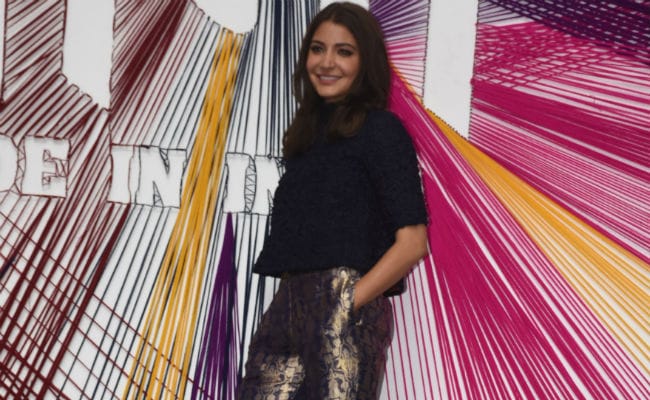 Actress Anushka Sharma, who stars as Mamta - an embroidery expert - in Sui Dhaaga, had initially said 'no' to the role, she told news agency IANS. Anushka stars opposite Varun Dhawan in Sui Dhaaga, which tracks the story of Mamta and Mauji, a married couple, who make a name for themselves through their talent. "When Sharat Katariya (director) came to me with the script, I was excited to read it. I had seen his previous film and had loved it. When I read Sui Dhaaga, I loved the script and what they were trying to do with the story. I loved that Yash Raj was making the film but still, I said no at first," said Anushka.

"I could not understand how I would play this character. I always wanted to challenge myself as an actor but this was differing with my personality on another level. So I was afraid and I told him I don't think I can do this character," she added.

For the first time, Anushka plays the role of a simple villager. She told IANS that Sharat Katariya and producer Manish Sharma convinced her to play Mamta's role and how they thought she was the right choice. "Maneesh and Sharat were extremely convinced that I am the right person to play this character. Sharat even visited my house and he told me how he sees the character and why he thinks I am actually the right fit. To be honest I went with his faith in me more than my own faith in myself. And I am so happy that I actually did the film and I am so proud that I have played this character," she said.

Sui Dhaaga is set in a small town in Uttar Pradesh. Mauji leaves a job of a salesman after being humiliated at work. He later starts working as a tailor and becomes self-employed. Sui Dhaaga a story about getting respect through self-reliance. The plot is inspired by Mahatma Gandhi's philosophy and on the ideology of Make In India.