Whoa. Priyanka Chopra Is Killing It With Quantico Swag

Priyanka Chopra was spotted on Quantico sets in tangerine bunker gear, reflectors and oodles of swag 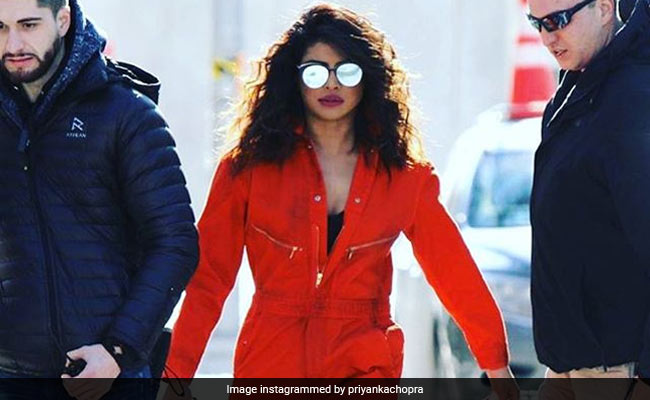 Priyanka Chopra on the sets of Quantico (courtesy priyankachopra)

New Delhi: Priyanka Chopra's Quantico shooting is going on in full force with regular updates on the actress' Instagram. Just a day after the premiere date of Quantico 3 was revealed, Priyanka was spotted on the sets in tangerine bunker gear, reflectors and oodles of swag. "When you walk onto set like you just saved the world...a day in the life of Alex Parrish," she Instagrammed. Too much swag, just too much. Ahead of the shoot, Priyanka and her co-star Marlee Matlin (who joined the Quantico cast from season 3) were twinning like the "golden girls": "Looking forward to today's shoot with you," she Instagrammed.

You saw Priyanka in bunker gear, now see her arriving on the sets looking like a rockstar! This was Priyanka Chopra on the sets Quantico a day before, when she had a luncheon with her band of boys - show regulars Jake McLaughlin and Russell Tovey, and also Alan Powell, who joined the show this season. Can you pull off a pair of distressed pant-skirt with scarlet boots like Priyanka? You can try.

Here's how "three dudes and a chick walk into a bar" and "we lunched... we laughed ... we went back to work," Priyanka captioned this photo.

Three dudes and a chick walk into a bar ... we lunched... we laughed ... we went back to work. @alanpowell10 @jakeamclaughlin @russelltovey @abcquantico

Promoted
Listen to the latest songs, only on JioSaavn.com
Of Priyanka's "3 am flights and 6 am shoots" in the chilly New York weather:

@priyankachopra shrugs off the chilly winters like a fashion pro!

Priyanka Chopra returned to Quantico sets to headline the show's third season as FBI recruit-turned-CIA agent Alex Parrish after spending Christmas in Mumbai and New Year in London. Quantico 3 premieres on April 26. She is also awaiting the release of two more Hollywood films - Isn't It Romantic? and A Kid Like Jake. She's yet to announce her next Bollywood project.