Army Of The Dead: Meet The "Jai-Veeru" Of Zombie Land 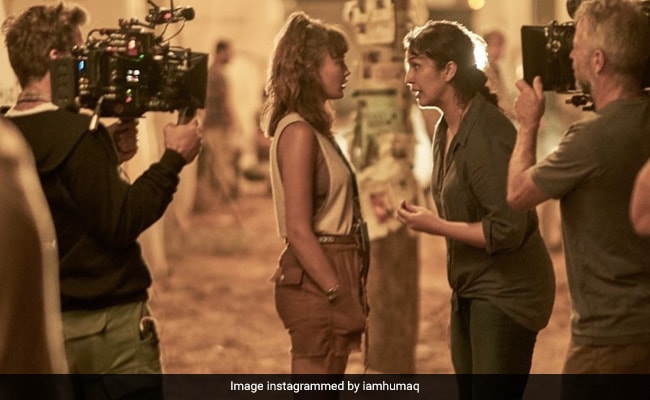 Actress Huma Qureshi had a gala time on the sets of her latest Hollywood film Army Of The Dead. Need proof? Head to the actress' Instagram account and treat yourself to some special behind-the-scenes images from the Zack Synder  directorial. One of the most recent photos shared by the actress is an ode to the friendship between the characters Geeta and Kate in the movie. Huma gave her fans a hint at the characters' special bond by using a Bollywood analogy from the classic 1975 film Sholay. Tagging actress Ella Purell who plays Kate, Huma wrote, “Geeta and Kate are the new Jai-Veeru of course in Zombie Vegas…” In the photo, Huma and Ella are seen having an intense conversation with Zack filming them.

She further quoted and improvised the lyrics of the famous song picturised on the Jai-Veeru characters in Sholay. The actress wrote, “...ye dosti hum nahin bhulenge (We will never forget this friendship)... bhulenge toh magar tujhe ‘zombie' key pass na chodh reng (Even if we do, I will not leave you near a “zombie”) Can you guys spot Zack in the photo ???”

Reacting to the snap, actor Varun Dhawan wrote, “Congrats, Huma”. A fan said, “Zack filming it on the left. Didn't know he was DP too. Blown! and congratulations! What a zombie ride.”

Recently, the actress shared another photo from the sets of the zombie heist film. This time she is seen posing with ace stunt performer Richard Cetrone. Richard, who is known for his work in movies such as Batman v Superman: Dawn of Justice, Justice League, and Zack Snyder's Justice League, is seen in zombie costume and make-up.

Meanwhile, Huma has an exciting year ahead with the political web series Maharani and the spy thriller Bell Bottom opposite Akshay Kumar.