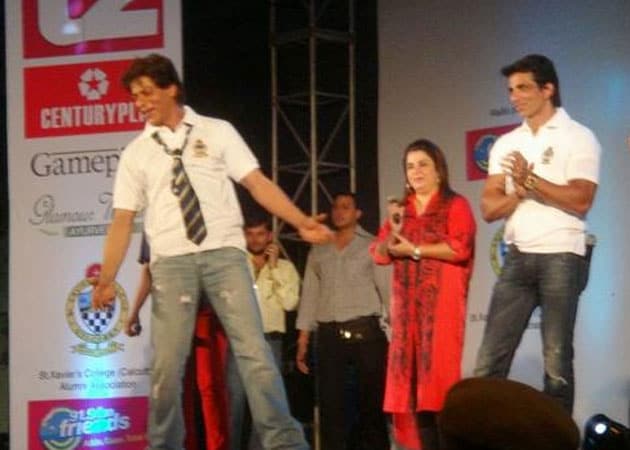 This image was posted on Twitter by The KINGs CLUB

Witty answers, anecdotes, flying kisses and lots of jhatkas and matkas by Bollywood superstar Shah Rukh Khan punctuated a starry Wednesday evening as he toasted the success of Happy New Year with the film team and audience at the St. Xavier's College in Kolkata.

Taking questions from a packed house, SRK - along with Happy New Year director Farah Khan, cast members Sonu Sood and Vivaan Shah - interacted with youngsters on stage and on the ground, enacted scenes, sang, shook a leg to hits like Lungi Dance from Chennai Express and Indiawale from Happy New Year and reiterated his admiration for the Kolkata fanbase.

"I am King Khan for the love that you guys have given me. You really have adopted me. No other city gives me this feeling," SRK said to cheers and thunderous applause from the audience.

While one fan, Lakshmi Khanna urged him to repeat Om Shanti with her and brought along a gift bag, a young admirer Lovely questioned the absence of Happy New Year actor Deepika Padukone.

Shah Rukh, in his inimitable style, praised her for being more beautiful than Deepika and responded that the actress was busy in a shoot.

"I will bring her along with me to the next match at Eden Gardens," SRK, owner of the Indian Premier League franchise Kolkata Knight Riders, promised.

While the focus was on HNY, fans expressed their love for his other memorable films like Dil Toh Pagal Hai (DTPH), Devdas and Chennai Express as well.

Asked by a youngster to "woo" Farah, SRK sportingly recited the "Aur Paas" (closer) dialogue from Dil Toh Pagal Hai as he held Farah's hand and ultimately wrapped her in a hug

"See? Easy," he chirped while Farah dressed in a stunning red kurta added "This is my lucky day."

Shah Rukh's love for the city's energetic and enthusiastic audience, was echoed by Sonu and Farah during their turns to talk.

"When Shah Rukh told me 'You have to come to Kolkata' to feel the love, I didn't quite believe it, but now I am feeling the love," said Farah.

Sonu, who greeted the spectators in Bengali, also acknowledged Shah Rukh's claim that the Kolkata crowd is the best.

Vivaan termed the experience as "amazing."

Promoted
Listen to the latest songs, only on JioSaavn.com
Shah Rukh ensured fans had their say and he didn't shy away from answering bold questions like "how can you be so sexy."

"I am born sexy," he said in his signature suave voice as the audience went wild.