When Ramayan Star Arun Govil Starred In A Film With Sridevi

Can you guess the film in which Arun Govil starred with Sridevi? 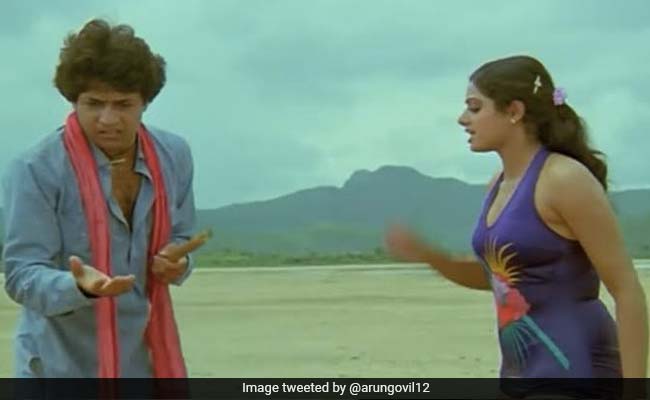 Did you know that Arun Govil, who is best-known to his fans as Lord Ram from Ramanand Sagar's Ramayan, has been a part of a few Bollywood films? Yes, you read that right. The veteran actor spilled the beans on some of the Bollywood projects that he has been a part of. Mr Govil had an interactive session with fans on Twitter on Monday night. A curious fan shared a still from the 1983 film Himmatwala, which featured Mr Govil and the late actress Sridevi and asked the actor, "Sir, tell me about this film with Sridevi ji." Arun Govil replied: Himmatwala, I played a deaf and dumb guy." Arun Govil starred in a relatively small role in the film. His character in the film was named Govind.

Himmatwala, a remake of the 1983 Telugu film Ooruki Monagadu, starred Jeetendra, Sridevi and Amjad Khan in the lead roles. The film emerged as a hit and its tracks like Naino Mein Sapna and Taki O Taki were equally popular.

Meanwhile, when a fan asked the actor about a scene in the TV show Ramayan which was extremely difficult for him, Arun Govil wrote: "Hearing the news of king Dasharatha's death and reacting to that."

hearing the news of King Dashrath' death and reacting on that. https://t.co/yvK7mvidKa

Another fan shared a film still, featuring Arun Govil and asked him about it, to which he replied, "Jiyo To Aise Jiyo, Rajshri productions ...with Debashree Roy."

Written, produced and directed by Ramanand Sagar, Ramayan first aired on Doordarshan in 1987 and the show acquired a cult status over the years. The re-telecast of Ramayan has become the most "watched entertainment show in the world," almost 33 years after its release. The show also starred Dipika Chikhlia Topiwala and Sunil Lahri as Sita and Lakshman, respectively. The show also featured Lalita Pawar as Manthara, Dara Singh as Hanuman, and Arvind Trivedi as Ravana.