When Priyanka Chopra's Father "Pulled Her Up Onto A Stage And Coaxed Her Into A Duet." See Throwback Pic

On her father's death anniversary, Priyanka Chopra shared an excerpt from her memoir titled Unfinished and expressed how much she misses her dad 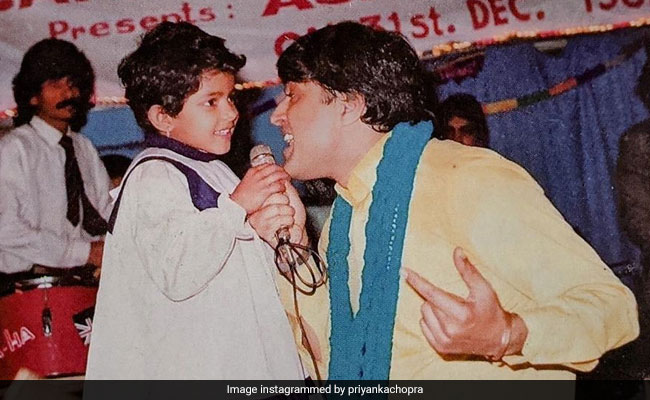 Priyanka Chopra and her late father Ashok Chopra always "had an understanding" - in her childhood, whenever he used to perform at an Army club, he would "look into her eyes" while singing his first song. Priyanka's parents Dr Ashok Chopra and Dr Madhu Chopra served in the Army. On her father's death anniversary, Priyanka Chopra shared a page from her memoir titled Unfinished and wrote about how much she misses her dad. The excerpt that the actress shared on Instagram is from the time when she was 5. "From my earliest years, my dad and I had an understanding: Whenever he was performing at the Army club, he would look me in the eye during the first song. The New Year's eve, I was 5, he forgot, so I started to leave in a huff. Dad jumped off the stage and pulled me onto it with him, coaxing me into a duet - a nursery rhyme - and winning my forgiveness," read the except.

The photo shared by Priyanka Chopra features a much, much younger version of the actress singing with her dad on a stage. A perfect father-daughter moment, we must say. Sharing the excerpt from Unfinished, Priyanka Chopra wrote: "It never gets easier... love you dad" with a heart icon.

Ashok Chopra died on June 10 in 2013 after battling cancer.

See how Priyanka Chopra remembered her father on his death anniversary:

Priyanka Chopra often shares anecdotes from her childhood. In December last year, she posted a picture of herself "dressed in her dad's Army uniform" and wrote: "This is a photo from the album in my upcoming book. I used to love following my dad around the house dressed in his Army uniform. I wanted to grow up and be exactly like him. He was my idol. My dad encouraged my sense of adventure. Even as a little girl...I was always out exploring, looking for adventure, trying to uncover something new. My urge was to do something that hadn't been done before, to discover something that no one had found yet. I always wanted to be first. That urge drives me every day, in every single thing I do."

Priyanka Chopra is married to singer Nick Jonas. Her memoir was launched earlier this year.