When Milind Soman And Ankita Konwar Did Yoga On A Beach

"Here we are back on one of Gujarat's fabulous beaches," wrote Milind Soman 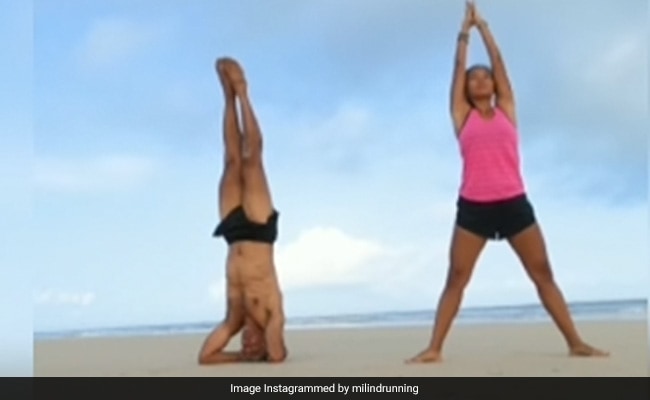 Milind Soman and Ankita Konwar in a still from the video. (courtesy milindusharunning)

Milind Soman and wife Ankita Konwar have been busy exploring Gujarat and how. The latest thing on the coupe's list was to do yoga on a beach. The model-actor shared a video from the session, in which he and Ankita Konwar can be seen doing yoga on the beach with utmost ease. Milind Soman accompanied the video with the viral track Love Nwantiti. He captioned the post: "Beaches are just so much fun! And so many things to do. Here we are back on one of Gujarat's fabulous beaches." He even asked his Instafam to guess the name of the beach and wrote: "From this tiny glimpse, can you guess which one?" He added the hashtags #beaches, #travel, #explore, #yoga and #incredibleindia to his post.

The couple have been actively sharing moments from their Gujarat vacation on their respective Instagram profiles. See some of the posts here:

Milind Soman married Ankita Konwar, also a marathon runner, in a Maharashtrian ceremony in April 2018. A few months after the wedding, the couple exchanged vows in a dreamy "barefoot wedding" in Spain. The Bajirao Mastani actor was earlier married to actress Mylene Jampanoi, whom he had met on the sets of the 2006 film Valley Of Flowers.

The actor, who became a household name after featuring in the video Made In India, is a supermodel, a marathon runner and now an author. He was last seen in the web-series Paurashpur. He has featured in films like Chef, Bajirao Mastani and 16th December among many others. He also featured in the second season of Amazon Prime Video's web-series Four More Shots Please!.

The actor is currently seen judging the second season of the TV reality show India's Next Top Model with Malaika Arora and Anusha Dandekar.