"Getting directed by the best in the business," wrote Shriram Nene 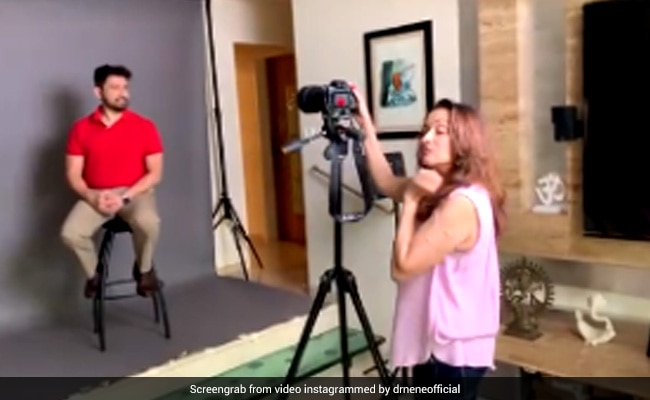 A still from the video. (courtesy drneneofficial)

Madhuri Dixit channeled her inner director and she did it for her husband Shriram Nene. On his Instagram profile on Wednesday, Shriram shared a video, which appears to be from their home. In the video, Madhuri can be seen filming him while he sits on a chair and poses for the camera. The video might be for Shriram Nene's YouTube channel, where he talks about issues pertaining to health. He captioned the post: "Getting directed by the best in the business. Not much to complain, is there? PS_ She's an absolute perfectionist." He added the hashtags #BTS and #DirectedByMadhuri to the post.

The actress stays with her family in Mumbai. She married Shriram Nene, a doctor, in the year 1999 and the couple are parents to two sons - Arin and Raayan. Arin recently "graduated from high school with flying colors (Madhuri Dixit's words)."

Madhuri Dixit, star of hits like Tezaab, Devdas, Dil Toh Pagal Hai, Devdas, Hum Aapke Hain Koun..!, Khalnayak, Saajan, , Beta, Koyla, Pukar, Prem Granth to name a few, will soon be making her debut in the digital world with Netflix's upcoming series, which will be produced by Karan Johar. The actress has previously collaborated with Netflix for a Marathi drama titled 15th August, which was her debut project as a producer.

In terms of films, she was last seen in the 2019 period drama Kalank, co-starring Alia Bhatt, Sanjay Dutt, Aditya Roy Kapur and Sonakshi Sinha. During the lockdown last year, she released her first single titled Candle. She currently features as one of the judges on the TV reality show Dance Deewane.