"I volunteered to be a taster," wrote Shriram Nene 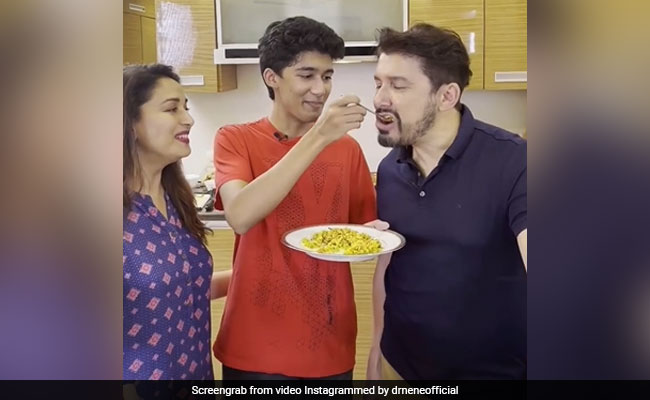 Madhuri, Shriram Nene and Arin in a still from the video. (Image courtesy: Instagram)

Madhuri Dixit and Shriram Nene's son Arin recently tried his hand at cooking after a long time and he did a good job, as per his parents. On Tuesday, Shriram Nene posted a video of himself tasting what his son cooked and wrote: "Arin's first cook in a long time and I volunteered to be a taster. Clearly, I like living on the edge. But boy, did he nail it. #firstcook #proudfather." In the clip, Madhuri Dixit can be seen standing on the other side of Arin and observing Shriram Nene's reaction after eating the dish made by Arin joyfully. She can also be seen laughing in the clip.

Arin Nene recently "graduated from high school with flying colors." Sharing a video collage comprising pictures from Arin's high school graduation day, Madhuri Dixit wrote: "A proud moment for Ram and I, as Arin graduates from high school with flying colors. Congratulations Arin and to the graduating class of 2021. We appreciate how hard this year has been for all of you and we salute your resilience, strength, hardwork and focus to rise above the situation and succeed. So, follow your passion and understand that one day you will have the power to make a difference, use it well. Wishing you success in everything you do. Love you always."

In terms of work, Madhuri Dixit has featured in several hits like Dil Toh Pagal Hai, Devdas, Hum Aapke Hain Koun..!, Khalnayak, Saajan, Tezaab, Beta, Koyla, Pukar, Prem Granth among others. The actress was last seen in Karan Johar's Kalank, in which she co-starred with Sonakshi Sinha, Alia Bhatt, Varun Dhawan, Aditya Roy Kapur, Sanjay Dutt. She has not announced her next film yet.