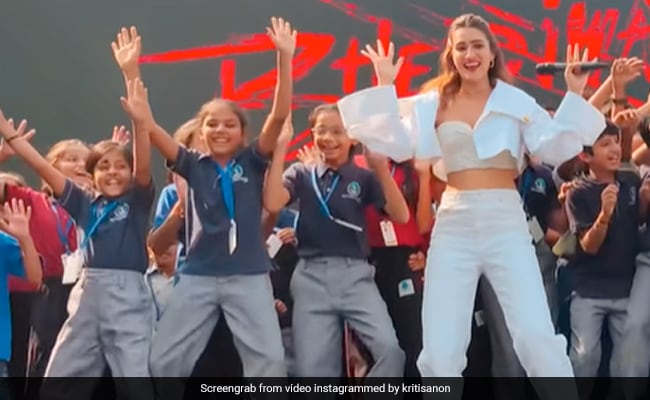 Kriti Sanon is having a lot of fun promoting her next film Bhediya. The film, which features her opposite Varun Dhawan, has already made all the right noises with its songs and trailer. So, when the team arrived in Ahmedabad to promote the movie to an audience of children, it called for some fun and dancing.  In a video shared by Kriti, she is seen performing on stage with students who look excited to shake a leg with the star. After this, Kriti also danced to Thumkeshwari, the peppy number from Bhediya that is ruling the music charts, with Varun.

Sharing the clips, Kriti Sanon said, “Thumkeshwari became a “chhoti bachchi” all over again. Best time I've had in Ahmedabad.” For the unversed, the chhoti bachchi reference is a nod to the viral dialogue from her film Heropanti with Tiger Shroff.

Varun Dhawan, on Tuesday, also shared visuals from the same event. In his post, the star is seen animatedly introducing his character from the film to his young fans. Varun even imitates a werewolf – his character in Bhediya – to thundering applause from his fans. Sharing the video, Varun Dhawan wrote, “Kabhi kabhi inke bum se poonch bhi niklti hai. Thank u baccha log, see you in the theatre 25th ko. Ek dum maaja ma Ahemdabad.”

On Children's Day, Kriti Sanon shared the inspiration behind her look in the film with a fun video. In it, Kriti added several childhood pictures of herself with a bob cut similar to the hairstyle she is sporting in Bhediya. In the caption, Kriti said, “That's where Anika's look came from.. My bachpan. Always keep the “chhoti bachchi” alive. Here's to never growing up. Happy Children's Day!”

Bhediya has been directed by Amar Kaushik and will release in theatres on November 25. The film also stars Abhishek Banerjee and Deepak Dobriyal in important roles. Shraddha Kapoor is seen in a cameo in the song Thumkeshwari.