The Inspiration Behind Kriti Sanon's Bhediya Look, Explained In Her Children's Day Post

Kriti Sanon has shared a montage of special pictures on Instagram 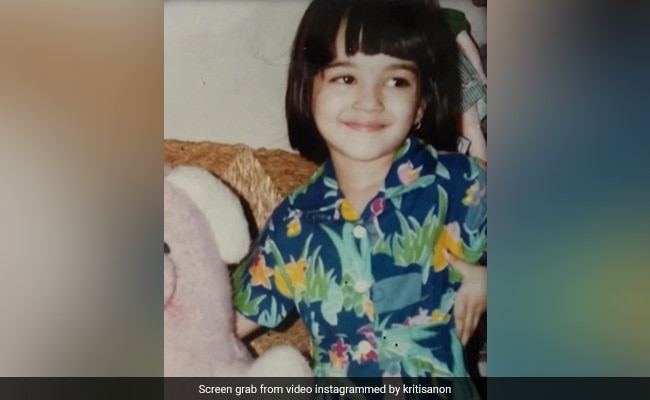 Kriti Sanon's look in Bhediya is already a hit with fans. The actor is seen in a bob haircut with bangs in the trailer of the film. Now, on the occasion of Children's Day, Kriti has shared the inspiration behind the look with her social media followers. As it turns out, Kriti did not have to look far for inspiration. In a video shared by her, Kriti has added some childhood pictures of herself with a bob cut much like the one she is sporting in Bhediya. Sharing the video replete with throwback images, Kriti confessed, “That's where Anika's look came from.. My bachpan. Always keep the “chhoti bachchi” alive. Here's to never growing up. Happy Children's Day!”

Also, don't miss the chhoti bachchi reference – a nod to the viral dialogue from her debut film Heropanti that has been a favourite with meme-makers for a while now. Replying to the post, Kriti's sister Nupur Sanon said, “My doll.”

Over the past few weeks, Kriti Sanon has been sharing glimpses from the promotional campaign for Bhediya with fans. Kriti recently shared a video of her grooving to the music and posing for pictures ahead of an event. In the caption, she said, “A little dopamine for the day!”

On another occasion, Kriti Sanon shared a video of her posing for pictures with the song Kate Nahin Kat Te from Mr India playing in the background. Dressed in a blue saree reminiscent of the one worn by the late Sridevi in the original track, Kriti said, “This song + blue saree is a vibe! They just fit…Also.. Just felt like saying.. I (heart emoji) U.”

Recently, Kriti Sanon shared that she will also be seen in The Crew  with Kareena Kapoor and Tabu.  Sharing a picture of the primary cast, Kriti wrote, “'The Crew' that I'm extremely thrilled to be a part of. When so many strong-headed, powerful, independent women come together- you know it's gonna be [fire emoji]. So excited to be working with these amazing women who inspire me every single day.” She also tagged producers Ekta Kapoor and Rhea Kapoor in the post.

Kriti Sanon ended the note by adding: “It's gonna be a crazy mad ride. And when it's Rhea Kapoor - it's gotta be all things glam.”

Kriti Sanon will also be seen in Adipurush opposite Prabhas. The film, directed by Om Raut, also stars Saif Ali Khan in lead.