Tabu, Kareena Kapoor And Kriti Sanon In The Crew - A Glimpse Of "Magical Madness" 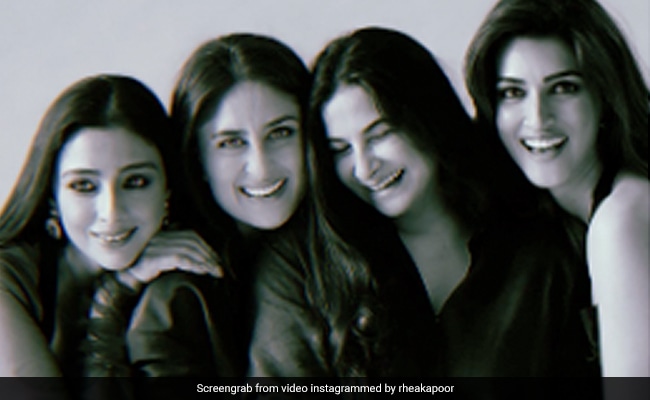 Rhea Kapoor, who is the producer of The Crew, starring Kareena Kapoor, Tabu and Kriti Sanon, introduced herself and her crew in the best possible manner through her latest Instagram post. On Wednesday, Rhea Kapoor shared a video of herself, also featuring her "crew" members Kareena Kapoor, Kriti Sanon and Tabu. In the video, Rhea and her crew can be seen having a fun time, while getting their makeup done for their photoshoot. The video starts with the question, "how are we feeling," to which Kareena, Kriti and Tabu answer "excited." Rhea Kapoor in the video revealed that she is feeling "stressed." Kareena Kapoor can be seen making fun of Rhea Kapoor for feeling stressed for a photoshoot. In rest of the video, the girl gang can be seen getting ready and posing for the photoshoot. The video ends with the text, "coming to you... super soon." Sharing the video, Rhea wrote, "Hi, I'm the producer and this is my crew! When girls get together some magical madness is bound to happen." She tagged Tabu, Kareena, Kriti and her co-producer Ekta Kapoor in her caption.

Kareena Kapoor, who was quick to respond to Rhea's post, commented, "Why are we so mad? Why is Rhea the best? Love," with four stars and one heart emoji.

Rhea's co-producer Ekta Kapoor too dropped many hearts and wrote, "the best," in the post's comment section.

Check out Rhea Kapoor and her crew in this video:

The cast of The Crew shared the announcement on November 8 on their respective Instagram handles.

Sharing a video, Tabu on her Instagram, wrote, "Excited for a new and crazy journey with Kareena Kapoor, Kriti Sanon for Rhea Kapoor and Ekta Kapoor's next. Directed by Rajesh Krishnan. Shoot begins February 2023."

The film, which is reportedly set against the backdrop of the struggling airline industry, will be directed by Rajesh Krishnan. The Crew will also mark the reunion of Rhea Kapoor, Ekta Kapoor and Kareena Kapoor after their 2018 filmVeere Di Wedding.