Kareena Kapoor, Tabu And Kriti Sanon To Co-Star In The Crew. This Is Not A Drill

The film will be co-produced by Rhea and Ekta Kapoor 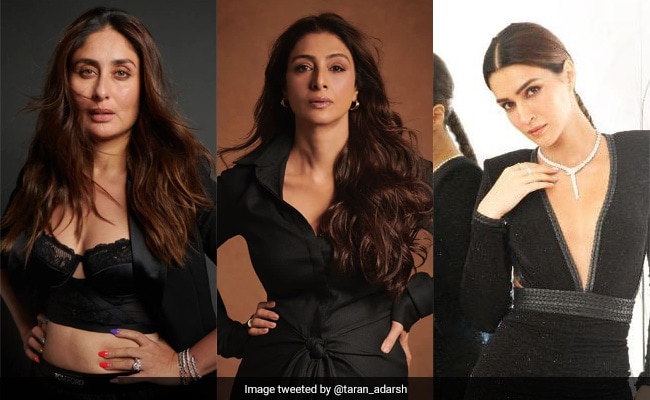 Kareena, Tabu and Kriti to co-star in the film. (courtesy: taran_adarsh)

Attention folks! Kareena Kapoor, Tabu and Kriti Sanon are all set to share screen space for the first time in a film titled The Crew. The film will be co-produced by Ekta Kapoor and Rhea Kapoor, who are reuniting after the 2018 hit Veere Di Wedding(which also featured Kareena Kapoor, along with Sonam Kapoor, Swara Bhasker and Shikha Talsania). The film is reportedly set against the backdrop of the struggling airline industry. The Crew will be directed by Rajesh Krishnan.

Announcing her association with the project, Tabu wrote in an Instagram post: "Excited for a new and crazy journey with Kareena kapoor, Kriti Sanon for Rhea Kapoor and Ekta Kapoor 's next. Directed by Rajesh Krishnan. Shoot begins February 2023."

Earlier on Tuesday, Rhea Kapoor teased her Instafam with an update about the project and she wrote: "Its been three years, we've missed you. But I think all this time was worth it. Can't wait to tell stories again. Something is coming."

Earlier this year, Kareena Kapoor spilled the beans on her new project and told news agency PTI that she is reuniting with Rhea Kapoor for a film and that it is not the second installment of Veere Di Wedding. "I am doing a film with Rhea. It is not Veere 2 . It is a story about three women. It is going to be slightly different. It's a super cool and fun story," the actress had earlier told news agency PTI.

In terms of work, Kareena Kapoor was last seen in Aamir Khan's Laal Singh Chaddha, which is a remake of the 1994 film Forrest Gump. Kriti Sanon awaits the release of Bhediya, while Tabu will next be seen in Drishyam 2. She featured in Bhool Bhulaiyaa 2 earlier this year.