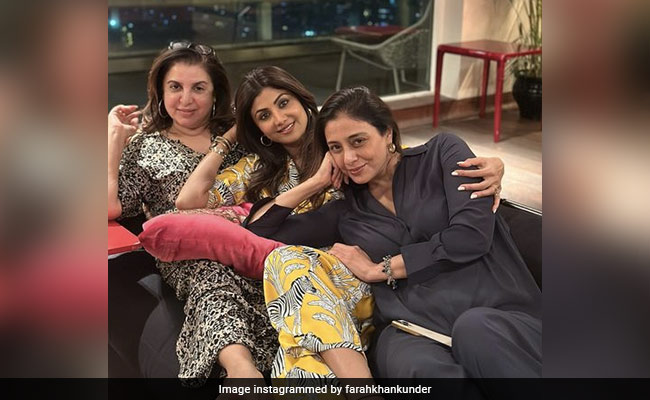 Farah Khan and Shilpa Shetty recently threw a "pyjama party" for Tabu, who celebrated her 52nd birthday on November 4. However, it doesn't seem like the "pyjama party" was the trio's initial plan. On Monday, Farah Khan shared a picture of herself with Shilpa Shetty and Tabu on her Instagram handle. In the picture, the trio can be seen sitting close to each other on a couch in casual outfits. Sharing the picture, Farah wrote, "Pyjama party... celebrating Tabu's birthday dressed in formals. Thank you Shilpa Shetty for promising us Bastian and landing up at mine." Shilpa was quick to react to the post and wrote, "Promise will be kept so long as the after party is still at yours Farhooo. Happppyyy Burdaaayyyy Timpoooooo meri jaan."

Check out a picture from Farah Khan's pyjama party with Tabu and Shilpa Shetty:

On November 4, Farah Khan shared many throwback pictures with Tabu on her Instagram handle, wishing the actor a happy birthday. Sharing the pictures, Farah wrote, "My jaan, my most talented friend of last 30 years... and they say friendships don't last in Bollywood... happy birthday Tabu. If you were playing a dead body you would still act better than everyone. Love you forever."

Farah Khan is a filmmaker, producer, actor and choreographer. She has directed films like Mai Hoon Na and Om Shanti Om among others.