"Umang Award function performance went kickass but getting ready for it was much more fun," wrote Kartik Aaryan 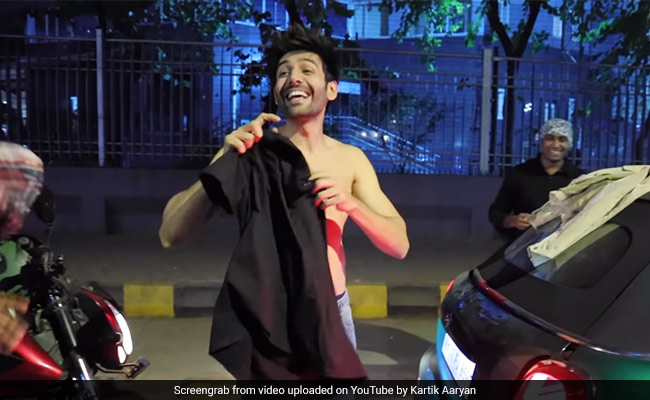 Kartik Aaryan in a still from the video. (courtesy: YouTube)

Kartik Aaryan has been actively posting videos on social media during the lockdown - some of these were hits and some misses. This is the story of the one that was a hit with his fans. Kartik, on his official YouTube channel, posted a throwback video from last year, in which he could be seen changing clothes in the middle of a Mumbai street. In the video, the Love Aaj Kal actor, who was on his way to attend the Umang Awards, got out of his Mini Cooper, thinking of what he would be wearing for his performance. However, he found a quick fix and decided to wear his hairstylist's t-shirt to the event. He signed off the video saying, "Aaj ka din ho gaya (it's done for today)." For his final performance at the award show, Kartik wore the borrowed black t-shirt with a pair of black trousers and he added a shimmery blue jacket.

In 2019, the actor starred in Luka Chuppi, co-starring Kriti Sanon, and Pati Patni Aur Woh, alongside Ananya Panday and Bhumi Pednekar - both the films performed well at the box office. He was last seen in Love Aaj Kal, opposite Sara Ali Khan. The actor will next be seen in Bhool Bhulaiyaa 2, co-starring Kiara Advani and Tabu. He has also signed the second installment of the 2008 film Dostana, co-starring Janhvi Kapoor and newcomer Lakshya Lalwani.