Kartik Aaryan Did Not Post A Mother’s Day Pic. So, This Is What His Mom Did 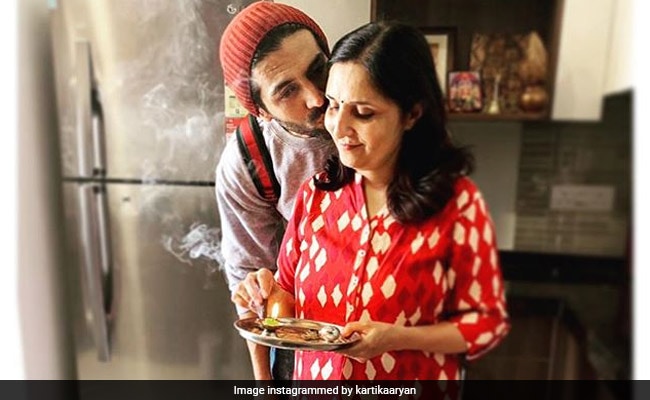 Kartik Aaryan, who never fails to crack up his Instafam with his goofy pictures and hilarious videos, just added another snippet of fun banter between him and his mom and it has our heart. On Monday, Kartik grabbed a permanent spot on the trends list with a video featuring himself and his mother's voice. Their subject of discussion - Kartik Aaryan didn't post a mother's day picture with his mom. In the hilarious video, his mother Mala Tiwari was heard complaining to Kartik for not posting a mother's day picture. Reacting to the complaint, Kartik made a hilarious reference to the time when fans offered him Rs 1 lakh for replying to their comments and said, "I get lakhs for each post, will you pay," to which her mother hilariously replied saying, ":Ek laath dungi (I'll give you a kick). The aunt from Bhopal has called twice. Now quickly post a selfie with me." Kartik shared the snippet of their mother-son fun banter on his Instagram profile and captioned it, "Maa ki mamta." Take a look:

On the work front, Kartik Aaryan was last seen in Intiaz Ali's romantic drama Love Aaj Kal where he starred opposite to Sara Ali Khan. He has films such as Bhool Bhulaiyaa 2 and Dostana 2 to look forward to.