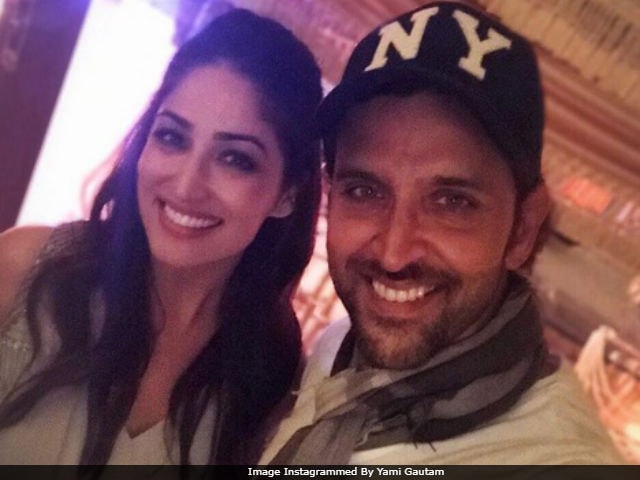 New Delhi: Actors Hrithik Roshan and Yami Gautam, co-stars of 2017 film Kaabil, met each other at filmmaker Rakesh Roshan's birthday party and delighted their fans with a special selfie. Rakesh Roshan is Hrithik's father and also the producer of Kaabil. He turned 68 on September 6. Hrithik and Yami smiled for the selfie, which the actress captioned as, "About last night! Felt like #Kaabil reunion." Yami looked pretty in a sea green top and Hrithik - dapper as always. Kaabil was Hrithik and Yami's first film together and released in January this year. The Sanjay Gupta-directed film received mixed response at the box office.

See the selfie which Yami shared.

Of working with Hrithik, Yami earlier told news agency IANS, "He is such a selfless actor. We actors always work hard for our good performance, but he is concerned about the whole scene, including the performance of his co-actors, dancers and everyone. Whether it is on set or off the camera, he never made you feel that he is a star. He is a happy-go-lucky person and on set, he is an actor. That's why I call him a truly inspirational personality."

Promoted
Listen to the latest songs, only on JioSaavn.com
Hrithik Roshan is the star of films such as Kaho Naa... Pyaar Hai, Koi... Mil Gaya, Jodhaa Akbar and Agneepath. He was married to Sussanne Khan but the couple divorced in 2014. They are parents to sons - Hrehaan and Hredhaan.