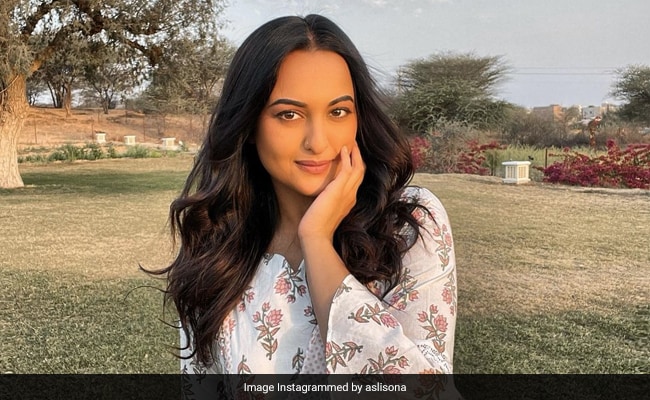 First, happy birthday, Sonakshi Sinha. The actress turned 34 today and her love for cinema is very evident in her birthday cake. Sonakshi celebrated her birthday this year with a cinema-themed cake. How we know this? Courtesy, her Instagram story. The scrumptious looking cake was shaped in the form of a hat that had posters of Sonakshi's movies on its sides. If you feel that is filmy enough, the cake also had an edible fondant camera on the top of it. A clapper board reading: 'Rockstar' was kept right next to the cake that had a lot of stars on top of it. "Happy birthday to our dear princess," the text on the cake read.

The birthday cake isn't the only sweet thing that Sonakshi received today, the actress has been receiving scores of birthday wishes from her fellow celebrities on social media since this morning.

Madhuri Dixit, who has worked with Sonakshi Sinha in the period-drama Kalank wished the actress by sharing a picture of herself and the birthday girl on her Instagram story. "Wish you a very happy birthday dear Sonakshi. May you shine bright like the star that you are," Madhuri wrote along with the picture.

Actress Ananya Panday also wished the 34-year-old actress on her birthday. Ananya also shared a picture of herself and Sonakshi on her Instagram story, and wrote: "Happy birthday Sonakshi Sinha. You are awesome."

Sonakshi's Dabangg 3 co-star Saiee Manjrekar shared a throwback picture of herself and Sonakshi on her Instagram story to wish her. "Happy birthday, love yaa Sonakshi Sinha," she wrote along with the picture.

Actor Riteish Dekhmukh, on the other hand, shared a portrait of Sonakshi on Instagram to wish her. "Happy Birthday to the golden girl Sonakshi Sinha -have a great one !!!! Much love," he wrote in the caption of the post.

Sidharth Malhotra, who has worked with Sonakshi Sinha in the 2017 film Ittefaq, shared a picture of himself and the birthday girl from one of the promotional events of the film. "Happy birthday our 'Asli Sona' big love and hug," he wrote along with the picture.

In terms of work, Sonakshi Sinha was last seen in Dabangg 3 co-starring Salman Khan. She will next be seen in Bhuj: The Pride Of India and Bulbul Tarang.