In her latest social media post, the star gives a twist to the buzzword of the times we live in 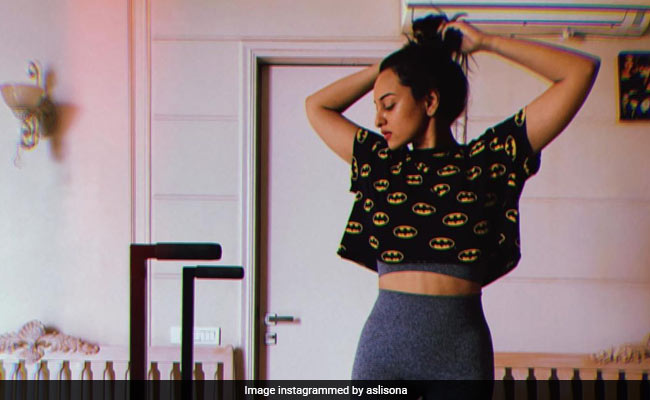 Work-from-home (WFH) has been the norm since the outbreak of the COVID-19 pandemic, and the way things appear at the moment, we'll all be at it for a long time to come. While the WFH routine may leave little scope for physical activity, actress Sonakshi Sinha seems resolute on redefining this buzzword. In her latest Instagram post, the 33-year-old oozes oomph as she poses next to a split-pedal stability chair in a Batman crop top and grey gym shorts. She is seen holding her hair up and flaunting her toned abs and long pins. She captioned it, "When #WFH for you means Workout from home."

Sonakshi remains quite active on social media and keeps her fans engaged with regular and interesting updates. She recently marked four years of her movie, Noor. Released in 2017, Noor is about an Indian journalist-writer's misadventures. Directed by Sunhil Sippy, the dramedy starred Sonakshi in the titular role. Kanan Gill, Shibani Dandekar, Purab Kohli played other important roles in the film.

Those who follow Sonakshi on Instagram, know well that she keeps her awareness posts interesting. Here are a few times when Sonakshi grabbed eyeballs for her interesting take on current issues.

Sonakshi made her Bollywood debut in 2010 with the film Dabangg. Her other commercial successes include Rowdy Rathore, Son Of Sardaar, Dabangg 2, Once Upon A Time In Mumbai Dobaara, R... Rajkumar, Kalank and Mission Mangal among others. Her last theatrical release was Dabangg 3, opposite Salman Khan, in 2019. Her next project is Bhuj: The Pride Of India, with Ajay Devgn playing the lead role. The film will release on Disney+Hotstar. She will also feature in Bulbul Tarang, which will release on Netflix.

Sara Ali Khan Went On A Candle Light Dinner With...