"I would love to see a female singer joining my family," said Udit Narayan 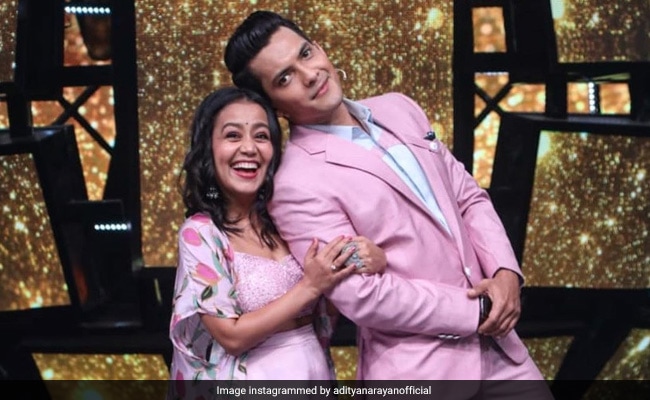 Neha Kakkar and Aditya Narayan on the sets of Indian Idol 11. (courtesy adityanarayanofficial)

Playback singer Udit Narayan recently addressed the rumours about his son Aditya Narayan's wedding to singer Neha Kakkar. The 64-year-old singer, in a recent interview with Navbharat Times, was asked about the wedding rumours of Aditya Narayan and Neha Kakkar's wedding, to which he replied by saying, "Neha Kakkar is a very sweet girl. She sings very beautifully. I like Neha very much. Not only just me, but people also like her. I really like her and she has made a name for herself in the industry. I also keep listening to her songs."

The singer added, "Both of them (Aditya-Neha) are also pairing up, but the rest is unknown to me. All this news is going on TV, but if they get married, I would love to see a female singer joining my family. Aditya Narayan hosts the TV reality show Indian Idol 11, in which Neha Kakkar appears as one of the judges. As of now, neither Neha nor Aditya have addressed the reports about their rumoured romance.

Neha Kakkar is best-known for singing tracks such as Dilbar redux, Manali Trance, Kala Chashma, Aankh Mare redux from Simmba among many others. Other than Indian Idol, Neha Kakkar appeared as a judge on the singing reality show Sa Re Ga Ma Pa L'il Champs.

Aditya Narayan, son of playback singer Udit Narayan Jha and Deepa Narayan, has hosted several reality shows such as Sa Re Ga Ma Pa Challenge, Rising Star 3 and Entertainment Ki Raat among many others. This is Aditya's first season as the host of Indian Idol. He made his Bollywood debut with the 2010 film Shaapit.