"We cut a lot of things because we felt it was not in good taste. We did try our best," said Gaurav Gera 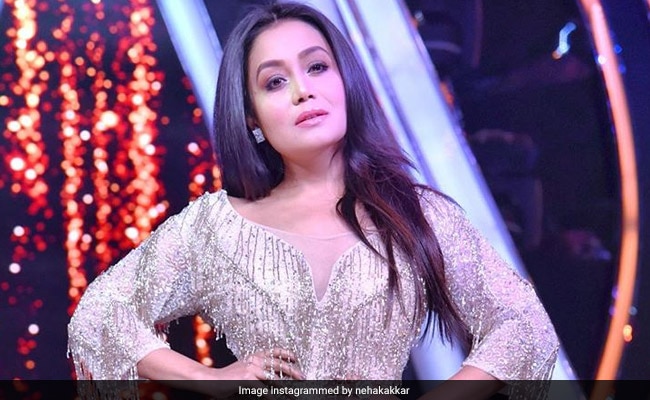 Singer Neha Kakkar slammed TV channel Sony Max and the makers of Kiku Sharda and Gaurav Gera's short-segment comedy show Dr Pran Lele for a recent episode, which featured a character named "Neha Shakkar." On the show, which features Gaurav Gera as a nurse and Kiku Sharda as a doctor, the comedians indirectly cracked jokes about Neha Kakkar's height by referring to her as a "chhota bluetooth speaker" and "Neha kankar" among other things. Kiku Sharda can also be heard saying in the video: "Tum kuchh bhi karke crores kama lete ho!" Soon after the video aired, Neha Kakkar lodged a strongly-worded protest in her Instagram stories, writing: "Shame on these people for creating such negative and insulting content! My people know how much I appreciate comedy on me and otherwise but this one is ridiculous! Stop using my name, stop enjoying, dancing and acting to my songs if you hate me so much. Thankless people." 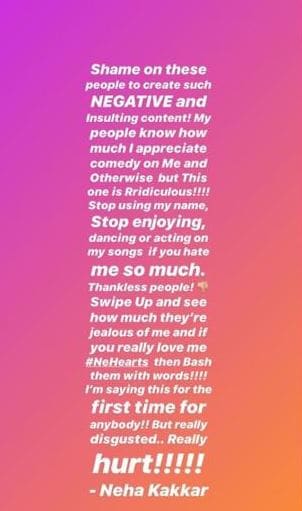 Neha Kakkar's brother Tony Kakkar, who is also a singer, brought the matter to the forefront by posting a lengthy note on Instagram: "Heartbroken. This is how you respect a small town girl who achieved everything on her own with so much struggle in life? Being a short girl, my sister has already suffered a lot. Do you understand what a person goes through when you make fun about her/his body size or shape?"

This is how you respect a small town girl who achieved everything on her own with so much struggle in life. Being a short girl My sister has already suffered a lot. Do you understand what a person goes through when you make fun about her/his body size or shape. Will you ever stop making fun of what god has made us ? Not just that you are talking rubbish about her talent too. Aren't you damaging her career by saying all that wrong things about her talent ? Those who don't understand music much would believe you easily coz you are a big national tv Channel. Fact is nobody becomes number 1 just by fluke and that too of a country which has a population of 1.3 billion #nehakakkar

Meanwhile, in an exclusive interview to Times Of India, Gaurav Gera said he would like to apologise to the 31-year-old singer, clarifying that as an actor, he simply performed the script that was given to him by the writers. "I thought they (Channel and Production house) work on so many comedy shows on the small screen they must be aware of the sensibilities. They know what runs and also they had an equation with Neha so they should have known where to stop. But I would like to apologise to her and I love her. She is fantastic... The idea was definitely not to hurt her. She shouldn't have any haters, we have not done this because we hate her. I am just an actor and that is just a show. We were given a few lines to enact by the writers, the channel, the production house... I am hired to act and mouth the line which are given to me, definitely we tried (Kiku Sharda and I) a lot to tone down a few things. We cut a lot of things because we felt it was not in good taste. We did tried our best. We shot a lot throughout the day."

"And she has not directly blamed us. She has also shared her disappointment towards the channel. The channel has removed the video. Kiku and I, we both were talking and we are fans of hers," Gaurav Gera told TOI.

I'm so lucky I have You All That too in a Biggggggg Number I would love you, respect you till my last breath My #NeHearts and Thank you for creating that Cutest Hashtag . " #NehuHappyNeHeartsHappy " . Good News for My NeHearts #PuchdaHiNahin Out Super Soon!!

Neha Kakkar is currently a judge on Indian Idol 11, which airs on Sony TV.