"You will see me doing something very special," Sonu Sood said 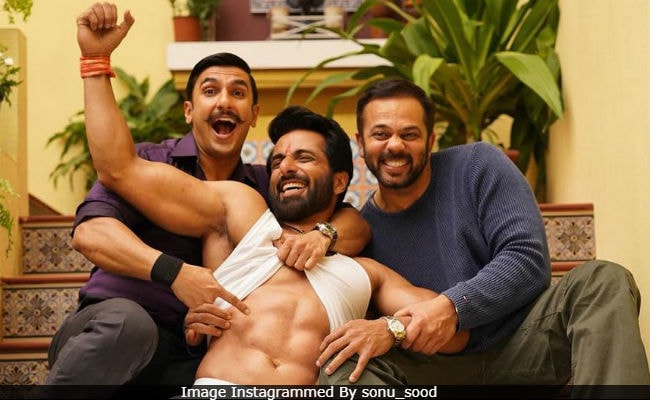 Tall and brawny actor Sonu Sood has done many stunts in his career. But he says in Rohit Shetty's Simmba, he has done something "special". Sonu, who paid a tribute to Bollywood's action heroes at the opening ceremony of the 49th International Film Festival of India (IFFI) here, believes times have changed for action sequences in the Hindi film world, and Simmba will be an example of how it has evolved.

"Dabangg was very special for me. I broke my nose also in a sequence with Salman Khan. But if you talk about the latest one, you will see me doing something very special and something I have not done in Dabangg," Sonu told IANS on being asked about his most special action performances till date.

"If you ask me the same question next month, the priority will be Simmba," Sonu added of the much-awaited 'masala' entertainer, which stars the inimitable Ranveer Singh in the lead role.

The film's team has been teasing fans about the intensity and power-laden action sequences.

Without divulging much, Sonu, who will sport two looks in the film -- one bearded and one non-bearded -- said: "This time he (Rohit) has gone to the next level only. I am very excited about it. I am sure people will love it."

He said while the growing world of VFX is lending a high on technology touch to action on the big screen, the old world charm of classic hand-fist fighting scenes makes Bollywood buffs nostalgic.

"People used to go to theatres to watch action movies in a big way. Kids used to try those action stunts at home.

"Now with VFX and all, time is changing. Technology is bringing a change in cinema and helps actors perform action that is larger than life, but that rawness which we used to see in Bollywood, is still entertaining.

"We still get glued to the TV if we see those films on air. Those action sequences may not be larger than life but they are special, they are raw which we miss sometimes nowadays," said the actor, who also featured with action superstar Jackie Chan in Kung Fu Yoga.

At IFFI, he was pretty excited to perform to iconic songs and dialogues of stars like Amitabh Bachchan, Dharmendra and Salman Khan.

Fit as a fiddle at 45, Sonu has also been promoting fitness through social media and on-ground events and internationally too.

"I feel in today's world when technology has completely taken over, with PS4 and mobile games and board games, the newer generation gets glued to it. They don't go to play outdoors.

"It's important to make the kind of films or do some activities which inspires them to go out. Every parent must push their kid to try doing some sport or physical activity. It's important," said the father of two sons.

Fitness has been a way of life for the actor, who comes from Punjab and has done a string of multilingual films.

"I chose fitness because I loved it. I never thought I will one day become an actor and it will help me. Fitness was something I thoroughly enjoyed and it is something I still do -- Whether I am travelling or whether I have time or not."