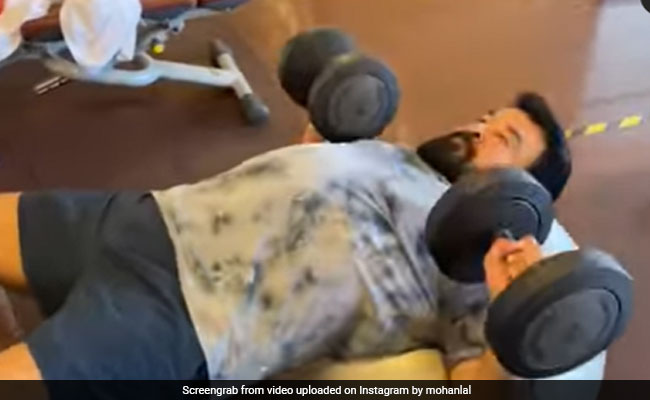 Mohanlal in a still from the video. (courtesy mohanlal)

Inspirational can't even begin to describe Mohanlal's latest Instagram entry. The 61-year-old actor redefines fitness in the video he posted on Instagram, in which he can be seen lifting dumbbells as DJ Kantik's version of Good Morning To The Night plays in the backdrop. Sharing the video, the actor wrote in his caption: "Exercise daily for a healthy body." He added the hashtags #exercise, #workout, #healthylifestyle and #reelitfeelit to his post. In the comments section of his post, Prithviraj Sukumaran revealed the amount of time the veteran actor spent in the gym and he wrote: "He was at the gym before I got there. He was still working out when I left." Mohanlal and Prithviraj will be seen together in the film Bro Daddy. The duo have earlier worked together in the 2019 film Lucifer.

The actor frequently shares videos from his fitness sessions. Earlier this year, he posted a video, in which he could be seen doing bench press and overhead press. He could also be seen working out with battling ropes. ICYMI, this is the video we are talking about:

Mohanlal, who has won five National Awards, is the star of films like Bharatham, Vanaprastham, Thanmathra, Paradesi and Drishyam, to name a few. Mohanlal's upcoming projects are Marakkar: Arabikadalinte Simham, Aaraattu and Jeethu Joseph's Ram.

In terms of work, Mohanlal was seen in the second installment of the hit Drishyam series. The film opened to largely mixed reviews. It released on streaming giant Amazon Prime Video. He will feature in an untitled film with director B Unnikrishnan.

On Nagarjuna's Birthday, Here's A List Of His 5 Best Performances