What Janhvi Kapoor Said About Kartik Aaryan's Role In Dostana 2

"It's a cool film that normalises homosexuality," said Janhvi Kapoor 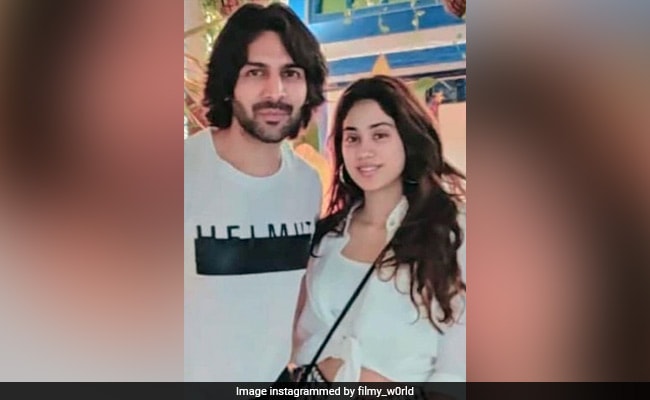 Actor Janhvi Kapoor says her upcoming film Dostana 2, a sequel to the 2008 hit Dostana, aims at normalising homosexuality. She praised co-star Kartik Aaryan for signing a project other male stars would have shied away from taking on. The 2008 film chronicled the story of two men who pretend to be gay to share an apartment with a girl with whom they eventually fall in love. Directed by Tarun Mansukhani, the original featured Abhishek Bachchan, John Abraham and Priyanka Chopra. The new take, directed by Collin D'Cunha, also stars debutant Lakshya.

In an interview with PTI, Janhvi Kapoor said Dostana 2 has been made keeping in mind the sensibilities of the current times and the team is conscious about depicting an authentic representation of homosexuality. "Dostana 2 looks at normalising homosexuality. There's still a stigma around it. Honestly, kudos to Kartik who is mainstream and is known for being the heartthrob of the nation to take on a role that I think most actors would shy away from because it is about homosexuality," she said.

The sequel would mark the 23-year-old actor's third film with Karan Johar's Dharma Productions, after 2018 debut Dhadak and last year's Gunjan Saxena: The Kargil Girl. Janhvi Kapoor said Dostana 2 will be an addition to the same sex love stories in Bollywood, which are few and far between. The pop-culture space, Janhvi Kapoor said, is full of mostly heterosexual romantic stories and they have tried to make a film which the community would be able to relate to.

"It's a cool film that normalises homosexuality. It is not caricaturish. You have these iconic (heterosexual) love stories like DDLJ, Jab We Met and other romantic-comedies. But people who identify themselves as homosexuals, don't have that," she said.

"I'm not saying that's what we are promising to do, but from our end, it's an attempt. It's a fun film and I really can't wait for the audience to see it," she added. Janhvi Kapoor shared she has finished half of the Dostana 2 shoot and would complete the remaining portions post Good Luck Jerry.

Backed by Aanand L Rai, Good Luck Jerry went on floors in January. It is directed by Sidharth Sengupta and written by Pankaj Matta. The actor said while it is too early to reveal the details, she described the film as a "mix of action, comedy and thrill". Janhvi Kapoor will next be seen on the big screen in the horror-comedy Roohi, co-starring Rajkummar Rao and Varun Sharma. Directed by Hardik Mehta and backed by Dinesh Vijan, the film is scheduled to be released on March 11.