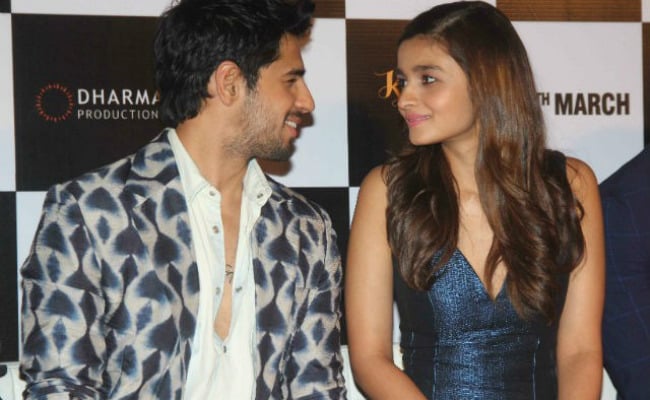 Alia Bhatt and Sidharth Malhotra debuted with Student Of The Year

Rumoured exes Alia Bhatt and Sidharth Malhotra just have two films together in six years of their journey in the Hindi film industry. The 33-year-old actor was recently asked if there's a possibility that the 2012 students of the year will co-star again, in an interview with Filmfare, when he said the wait is for the perfect script and a filmmaker "like Karan Johar". Referring to Varun Dhawan and Alia, Sidharth said: "Both are doing great work. People keep telling us that we should do a film together. But let's see. It's a matter of us getting the right script and a director like Karan Johar." This is what Sidharth cited as the reason: "Because only he can manage that. But now he's doing Takht. Everyone is busy with their own journeys."

Sidharth, who belongs from a non-filmy background, entered the film industry with 2012's Student Of The Year, which also marked the Bollywood debuts of Alia and Varun. Soon enough, dating reports of Alia and Sidharth started featuring in gossip columns but as per certain reports, Sidharth's apparent closeness to Jacqueline Fernandez eventually led to the couple's break-up last year. Alia is currently rumoured to be dating Ranbir Kapoor.

In the interview, Sidharth was also asked if he would continue to remain friends with Alia, when he said: "Of course. We started our journey together, we have done two films. Varun, Alia and I have a deep connect. We've shared many emotions and experiences together. So the bond will always remain."

In July this year, Alia Bhatt reportedly caught up with her rumoured ex at Akash Ambani's engagement party and had a blast. A source told SpotboyE: "Alia, Sidharth, Aditya Roy Kapur, Shraddha Kapoor and Parineeti Chopra were seen enjoying the party to the hilt. From the looks of it, Alia and Sidharth have no awkwardness anymore. They hugged and were also seen conversing with each other. After spending some time with the gang, Alia joined her current beau, Ranbir Kapoor, and his mother, Neetu Kapoor. It was heartening to see that these actors handled the situation with utmost maturity."