Ranveer Singh shared an update on his film Cirkus 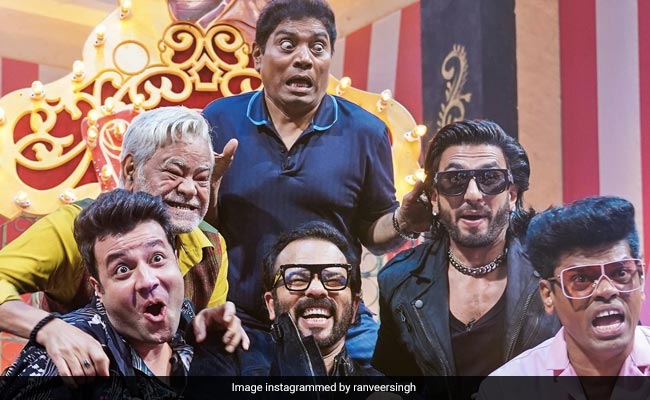 Ranveer Singh's next film Cirkus is all set to release on Christmas but before that, the film's lead actor wants his fans to meet the OG comedians with whom he will work in the Rohit Shetty directorial. On Monday, Ranveer Singh posted a picture of himself with Johnny Lever, Sanjay Mishra, Varun Sharma and Siddharth Jadhav. Also present in the frame is the film's director Rohit Shetty. Ranveer Singh captioned the post: "The kings of comedy! Cirkus... This Christmas! He added the hashtags #lol, #rofl and #lmao. The film will also star Pooja Hegde and Jacqueline Fernandez. In the comments section of Ranveer Singh's post, Fukrey star Varun Sharma wrote: "Lovvveee you Paaajiloveee." Siddharth Jadhav added, "Dada ke jalweeeee."

Meanwhile, Johnny Lever shared a separate picture from the sets and he simply wrote: "Cirkus 2022."

Cirkus marks Ranveer Singh's third collaboration with Rohit Shetty. The duo first worked together in the 2018 film Simmba. They also collaborated for Sooryavanshi, in which Ranveer had an extended cameo. The film featured Akshay Kumar and Katrina Kaif in the lead roles. Cirkus has been filmed across Mumbai, Goa and Ooty. The film will be co-produced Rohit Shetty, Bhushan Kumar and Reliance Entertainment.

The film is a Hindi adaptation of Shakespeare's The Comedy Of Errors. Other than Cirkus, Ranveer Singh will also star in Karan Johar's Rocky Aur Rani Ki Prem Kahani, co-starring Alia Bhatt.