How adorable is Zain Kapoor? 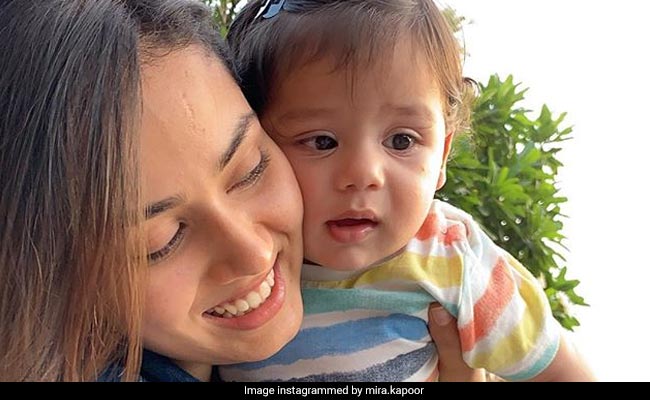 Thank you, Mira Rajput for sharing this adorable photo of herself and son Zain Kapoor. "Mom stay cool stay cool," Mira captioned the photo, which is perhaps her way of revealing the story behind Zain's expression. In the click, Mira Rajput can be seen playing with Zain, who will celebrate his first birthday in August this year. Mira, who holds Zain in her arms, can be seen smiling ear-to-ear in the photo. Zain Kapoor is Mira Rajput and Shahid Kapoor's second child and was born in August 5, 2018. Shahid and Mira are also parents to a daughter named Misha Kapoor, who is all set to turn three. Take a look at Mira Rajput's mommy-special post here:

Both Zain and Misha are Shahid Kapoor and Mira Rajput's favourite subjects when it comes to Instagram posts. Shahid recently trended a great deal for posting a goofy video of himself with his little one, which he posted with the caption: "Shady boys." Zain's expression in the video is simply adorable.

Mommy Mira Rajput once best summed up Zain Kapoor's antics as "small wonder" and then also revealed what Misha and Zain are up to when left together. "Zizi, I decided to wear your T-shirt cause it's still a bit big for you. It fits and I think I'm going to keep it." It's the same T-shirt BTW which Zain is wearing in Mira's above mentioned post.

Zizi I decided to wear your T-shirt cause it's still a bit big for you. It fits and I think I'm going to keep it #sharingiscaring #lifeintechnicolor

Mira Rajput and Shahid Kapoor are one of the top most favourite celeb couples in Bollywood. They got married in 2015 and made headlines for their 13-year-old age gap. While Mira has made her acting debut with a cosmetics product, Shahid Kapoor will next be seen in Kabir Khan.