Shahid Kapoor shared a video from his play date with his toddler son Zain. 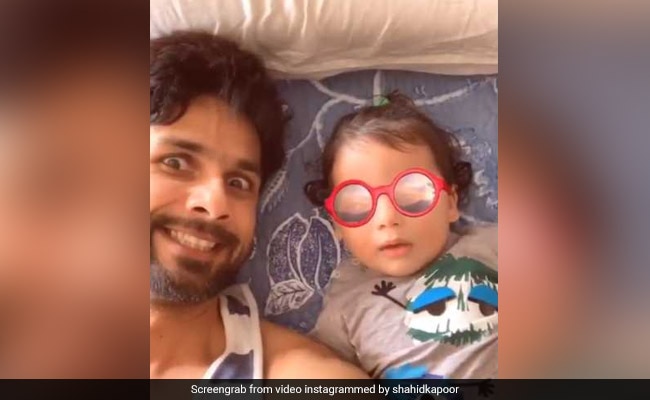 Shahid Kapoor, looking forward to the release of Kabir Singh, took time out from his busy schedule to catch up with his family. The 38-year-old actor shared a video from his play date with his toddler son Zain. Shahid, comfortably lying by Zain's side, fiddled with an Instagram filter while his son looked bamboozled. Shahid tried his best to extract a reaction from Zain, who just looked puzzled (and cute). The comments section of Shahid Kapoor's post is filled with compliments for Zain. "He's so cute duuuude... how is he yours??? Obviously gone on mommy," wrote Sonakshi Sinha, Shahid's R... Rajkumar co-star. Shahid's brother Ishaan Khatter posted ROFL emoticons while Malaika Arora wrote: "Too cute."

Zain is the younger of Shahid Kapoor and Mira Rajput's two children. Their daughter Misha is two-years-old. Zain, who was born in September 2018, now frequently features in his parent's social media posts. Initially, Shahid and Mira refrained from posting pictures of Zain on the Internet.

Earlier, Shahid Kapoor told news agency PTI that being a father changed him as a person. "Fatherhood has brought a lot of change in me as a person and as a human being. My priorities have changed. I am less self-oriented now, because I believe actors can never be not self-oriented... I have matured and feel a lot more grown up now," he said.

The trailer of Kabir Singh will drop on the Internet on May 2 while the film will open in cinemas on June 21.