"Progressively becoming the real me," Ananya Panday captioned the post 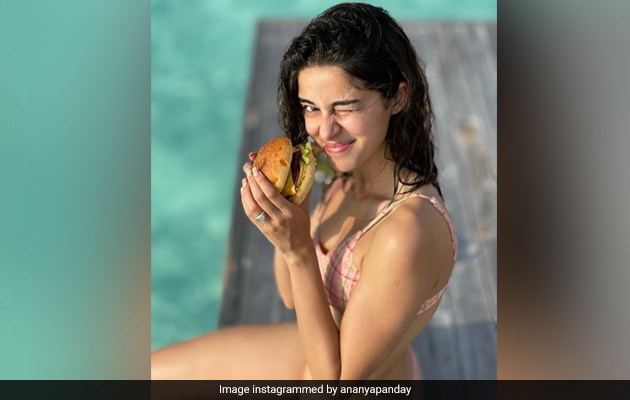 Well, well, Ananya Panday is currently in Maldives and so is her Khaali Peeli co-star Ishaan Khatter. The rumoured couple, who were spotted at the Mumbai airport together, have actively been sharing solo pictures from their holiday on their respective Instagram profiles. Ananya posted stunning sun-kissed pictures of herself from her vacation. Dressed in a pink bikini, Ananya can be seen having the time of her life in Maldives. She also posted pictures with her favourite snack - burgers. "Progressively becoming the real me," she captioned her post. In a separate post, she wrote: "Beach monkey (Alexa play 'Yeh Ladki' from 'Maine Pyaar Kyun Kiya' on repeat if you know you know. Hehe)."

Ishaan Khatter too seems to be having a great time in Maldives. He summed up his holiday mood with this picture and he captioned it, "Mood: Blue - Eiffel 65 (Flume remix)." This is the picture we are talking about:

Ananya Panday and Ishaan Khatter, who recently co-starred in Khaali Peeli, were photographed at the airport on Wednesday. Here are the pictures:

Last month, they were spotted together at Siddhant Chaturvedi's Diwali party in Mumbai.

Ishaan Khatter, son of Rajesh Khattar and Neelima Azeem, made his acting debut with Beyond The Clouds, which was directed by Majid Majidi. He then starred in Dharma Productions' Dhadak in 2018, He also featured in Mira Nair's web-series A Suitable Boy, co-starring Tabu.