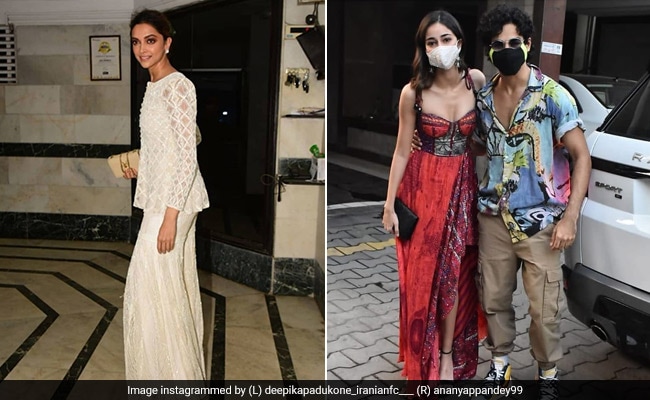 Bollywood stars put their most fashionable foot forward as they attended Gully Boy actor Siddhant Chaturvedi's Diwali party, which was hosted in Mumbai on Friday night. Deepika Padukone, who co-stars with Siddhant Chaturvedi in Shakun Batra's untitled film, headlined the party. The guest list also included Ananya Panday, who also co-stars with Deepika and Siddhant in the untitled film. Ananya's plus one for the party was her Khaali Peeli co-star Ishaan Khatter. Siddhant and Ishaan will be seen sharing screen space in Phone Bhoot, also featuring Katrina Kaif. Flashbulbs popped incessantly at all the stars as they arrived at Siddhant Chaturvedi's residence. Filmmaker Shakun Batra was also present at the party. Several fan pages dedicated to the actors, shared pictures on social media.

It's been so long since we last saw Deepika Padukone at a party. The actress was a vision in a pristine white outfit. The actress looked stunning as ever in an embellished kurta and a pair of matching palazzo pants. Deepika accessoried her look with a cream clutch and earrings. She kept it simple and chic with kohl-rimmed eyes and nude lip colour. See Deepika's OOTD here:

Ananya Panday and Ishaan Khatter were dressed in their quirky best. She wore a printed dress, with a slit on the side. Ananya carried a black clutch. She also wore a mask. We absolutely loved Ishaan Kahtter's uber-cool printed tee, which he wore with camel-toned pants. The Dhadak actor wore a mask too.

Karan Johar, who is co-producing the film with Apoorva Mehta under his banner Dharma Productions , confirmed the news on Twitter and revealed the film's main theme and also its co-stars in December last year. The stars recently wrapped the Goa schedule of the film.