'What An Honour': Ranveer Singh On Meeting Kamal Haasan 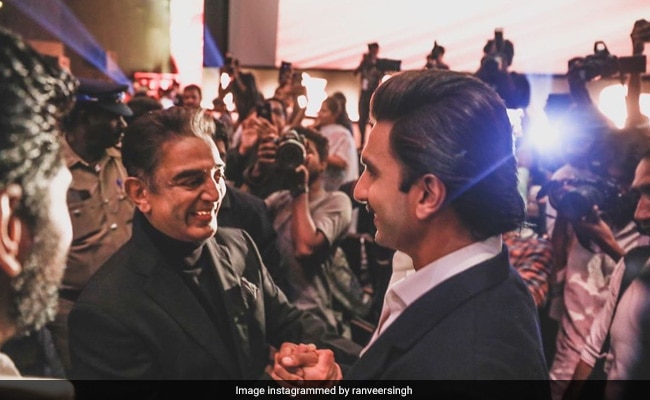 Ranveer Singh recently met veteran actor Kamal Haasan during his Chennai visit. The 33-year-old actor shared a picture from their meeting on his Instagram profile on Monday. Dressed in formal outfits, both the actors can be seen flashing bright ear-to-ear grins in the picture. Ranveer captioned his post: "One of the greats of acting. What an honour." Kamal Haasan will be presenting the Tamil version of the sports drama, directed by Kabir Khan. Meanwhile Nagarjuna Akkineni will be presenting the Telugu version of the film.

One of the greats of acting What an honour @ikamalhaasan

On Thursday, the makers announced Kamal Haasan's association with the project on social media and wrote: "'83 is set to reach far and wide, as the blockbuster king Padma Bhushan Kamal Haasan will be presenting the film in Tamil version."

Over the weekend, Deepika Padukone asked Ranveer Singh to bring a few food items for her from Chennai. The "Padmaavat" actress wrote: "Don't come back without 1 kg Mysore Pak from Shri Krishna and 2 packets of spicy potato chips from Hot Chips." Deepika and Ranveer's Instagram exchange often puts them on the top of trends list.

Directed by Kabir Khan, '83 has been produced by Reliance Entertainment. In the film, Ranveer Singh will be playing the role of Kapil Dev. Pankaj Tripathi will be seen playing the role of manager PR Man Singh. Ammy Virk has been cast as Balwinder Singh Sandhu, Saahil Khattar as Syed Kirmani and Tahir Bhasin has been zeroed in to play the role of Sunil Gavaskar in the film. Deepika Padukone has been roped in to play Kapil Dev's wife Romi Bhatia on screen. The film will hit the screens on April 10 this year.