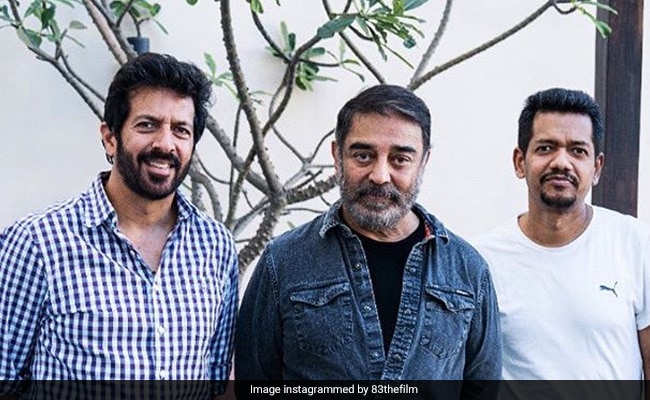 Attention, folks! There has been an addition of two big stars to Kabir Khan's forthcoming sports drama '83, which features Ranveer Singh in the lead role. The makers of the film shared the big news on Thursday. Superstars Kamal Haasan and Akkineni Nagarjuna will be presenting the Tamil and Telugu versions of the film, respectively. On Thursday, the makers announced Kamal Haasan's association with the project on social media and wrote: "'83 is set to reach far and wide, as the blockbuster king Padma Bhushan Kamal Kamal Haasan will be presenting the film in Tamil version."

Sharing Akkineni Nagarjuna's association with the project, the makers posted a picture of the actor along with the film's director Kabir Khan. "Akkineni Nagarjuna, whose name is enough to take over the box office, will be presenting the '83 film in the Telugu version. His association is definitely going to make the film touch an enormous amount of audience," read the caption on the post.

Directed by Kabir Khan, '83 has been produced by Reliance Entertainment. In the film, Ranveer Singh will be playing the role of Kapil Dev. Pankaj Tripathi will be seen playing the role of manager PR Man Singh, Ammy Virk has been cast as Balwinder Singh Sandhu, Saahil Khattar as Syed Kirmani and Tahir Bhasin has been zeroed in to play the role of Sunil Gavaskar in the film. Deepika Padukone has been roped in to play Kapil Dev's wife Romi Bhatia on screen. The film will hit the screens on April 10 this year.