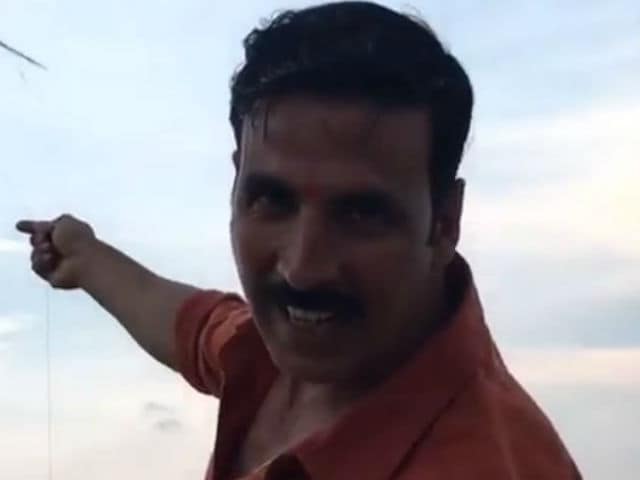 Akshay Kumar in a still from the video

New Delhi: What to do when the cameraman calls off the shoot due to bad weather? Actor Akshay Kumar found a way to keep himself occupied on the sets of Jolly LLB 2 in Varanasi.

Akshay, 49, Instagrammed a video of him flying a kite on the banks of the river Ganga on Tuesday. "Never thought I will be doing this sitting on the banks of river," said Akshay in the clip.

Have a look at this 'cool' video.

The 49-year-old star has been enjoying 'simple joys of life' while shooting in Varanasi. He was also tempted to take a dip in the river. Don't believe us? See what he posted on Instagram:

Jolly LLB 2, a sequel to the hit 2009 film starring Arshad Warsi, also stars Huma Qureshi and is being directed by Subhash Kapoor. The unit moved to Varanasi from Lucknow, from where Akshay posted this picture of himself and Huma at the railway station.

Greetings from Huma and me this morning straight from Lucknow station!Jolly indeed is having a jolly good time #JollyLLB2

Akshay, who just celebrated his birthday, took a short break from filming to vacation in the Maldives with his family - wife Twinkle and children Aarav and Nitara - and has resumed filming now.

Promoted
Listen to the latest songs, only on JioSaavn.com
Akshay has already starred in three films this year - Airlift, Housefull 3 and Rustom - and is currently also making 2.0, the sequel to Enthiran, with Rajinikanth. On Tuesday, he also announced new film Naam Shabnam, although it's unclear in what capacity he is involved.