What Abhishek Bachchan Posted On Amitabh Bachchan's 102 Not Out Day

"Sometime in the mid 90's... Still walking side-by-side. Amitabh Bachchan 102 Not Out now playing in a theatre near you," wrote Abhishek 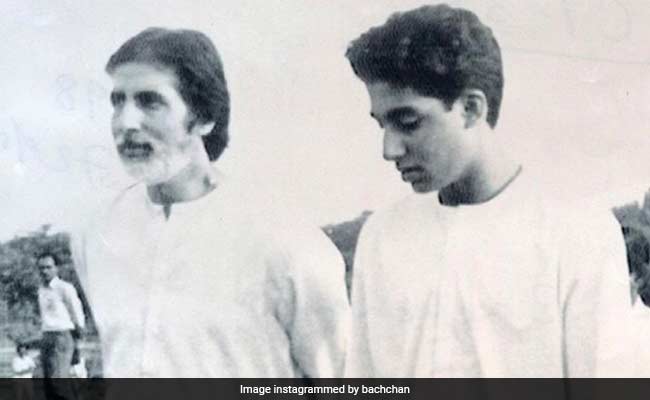 New Delhi: Abhishek Bachchan made the best use of 'Flashback Friday' as he shared a priceless throwback post to remind his Instafam that 102 Not Out is at the theatres already! Abhishek's megastar father Amitabh Bachchan plays one of the leads in 102 Not Out while the Rishi Kapoor plays the second protagonist in the movie. Amitabh Bachchan stars as a 102-year-old father in the movie while the 75-year-old son is played by Rishi Kapoor. Sharing a blast from the past, featuring a much younger version of himself and Big B, Abhishek wrote: "Flashback Friday. Sometime in the mid 90's... Still walking side-by-side. Amitabh Bachchan 102 Not Out now playing in a theatre near you. Do watch. #Yo #Badumbaa."

#flashbackfriday Sometime in the mid 90's... Still walking side-by-side. @amitabhbachchan #102notout now playing in a theatre near you. Do watch. #Yo #Badumbaa

Abhishek Bachchan is not the only star son who jumped to the promotional duties for 102 Not Out. Rishi Kapoor's son Ranbir, who is not known to have official social media accounts, also contributed with a selfie while plugging in the film. Ahead of the film's release, Abhishek and Ranbir attempted to beat their respective fathers at the pout game and posted this:

Yo! What they (the fathers) can do, we (the sons) try to do too. #102notout #fathersandsons #ootd @amitabhbachchan @chintskap #ranbirkapoor #mustwatch #pout

Promoted
Listen to the latest songs, only on JioSaavn.com
102 Not Out released on Friday with Saibal Chatterjee writing in his review for NDTV that the one-time frequent collaborations put in "their hearts and souls into what is essentially a two-hander that relies entirely on them." However, about the movie, he writes: "If only its far-fetched dramatic conceits had the finesse and firmness to carry the weight of the film's well-meaning whimsicalities all the way through to the climax, it would have been far more rewarding and rounded experience."

Directed by Umesh Shukla, 102 Not Out reunites Amitabh Bachchan and Rishi Kapoor after a hiatus of 27 years and is based on a play Gujarati play of the same name by Saumya Joshi.