The actress needed no words to express her joyful mood 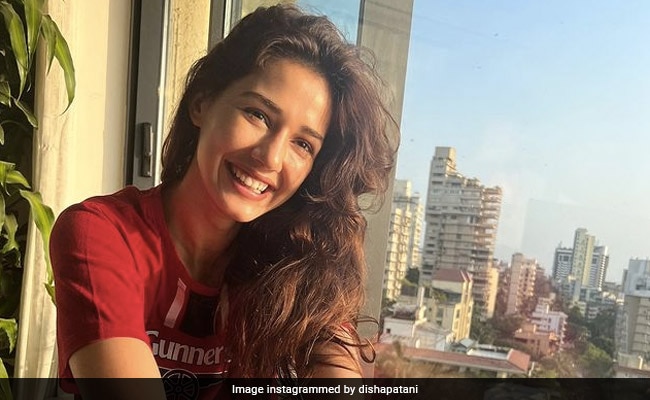 The weekends are a great relief for anyone who's been working around the clock. And, it's true for our Bollywood celebrities too. Most of the time, we look up to our favourite stars to get inspiration for the weekend mood. If you are such a Bollywood fan, you can right away take a look at Disha Patani's weekend post. She is embracing all the sunshine that she can get and it couldn't have been brighter for us. Disha posted a sunkissed photo of herself on Instagram. In the image, she is candidly smiling while sitting beside her window in a red shirt and white shorts. Of course, her smile and the sunny vibe are infectious. For the caption, the actress only left paw print emojis. Actress Elli AvrRam, who had featured alongside Disha in Malang, snatched the words out of our mouths as she commented, “Cutie”.

Disha Patani is forever a source of good vibes for her fans. And, who can stay glum when the actress appears in a ravishing violet dress in front of her Instafam. Disha wore it for the special screening of Tiger Shroff's Heropanti 2. The film also features Tara Sutarai and Nawazuddin Siddiqui in lead roles. Instead of trying to explain her mood in words, the actress left a unicorn emoji in the caption. Once, again Elli AvrRam commented and this time she chose unicorn, butterfly and flower emojis. Krishna Shroff, Tiger Shroff's sister, dropped a fire emoji.

Disha Patani often shows her playful side on social media. As if her smile were not enough to lift our mood, Disha's pets also join her in several posts. And, it only gets better. The actress often shares cute and goofy images with pet dogs Bella and Goku, and pet cats Jasmine and Keety.

On the work front, Disha Patani was last seen alongside Salman Khan in Radhe. She will next feature in Ek Villain Returns, co-starring John Abraham, Arjun Kapoor and Tara Sutaria. She also has Karan Johar's Yodha in her kitty.