"We Got Each Other's Back": Sushmita Sen's Note To Mom Subhra And Sister-In-Law Charu Asopa 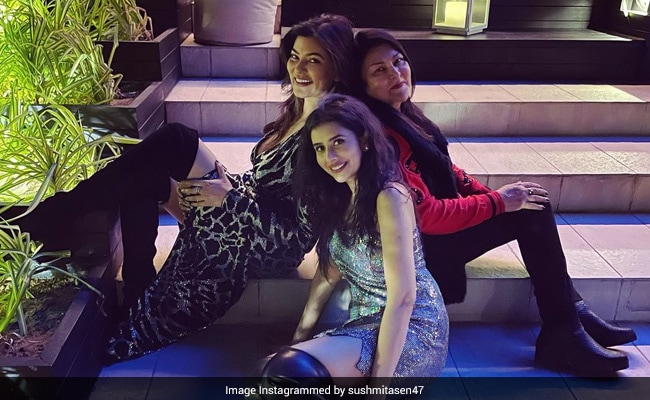 Sushmita Sen's latest Instagram entry is too cute. The actress, on Thursday, shared a million-dollar picture of herself along with her mom Subhra Sen, and sister-in-law and actress Charu Asopa. In the picture, all three of them can be seen sitting pretty and flashing ear-to-ear grins as they pose together. Sushmita Sen, posting the picture on her profile, captioned the post: "Maa and daughters! We got each other's back! Subhra Sen, Charu Asopa and yours truly. I love you guys." She added the hashtags #family #love, #belonging, and #shakti. In the comments section, Sushmita Sen's sister-in-law Charu Asopa wrote: "Love you didi."

On Thursday, Sushmita Sen shared another stunning shot on the photo sharing application and she wrote: "My thinking pout. Whenever I am at sea, I have a beautiful perspective of both land and ocean. It's a place where I am neutral! I have learned that the best decisions are made from where you're neutral and not from where you're torn."

Charu Asopa  married Sushmita Sen's brother Rajeev in a civil ceremony on June 7, 2019 after dating for four months. They later hosted a grand ceremony in Goa, which was attended by Sushmita Sen, her daughters, and boyfriend Rohman Shawl.

Sushmita Sen was crowned Miss Universe in 1994. She made her Bollywood debut in the 1996 film Dastak. She has featured in films such as Biwi No 1, Do Knot Disturb, Main Hoon Na, Maine Pyaar Kyun Kiya, Tumko Na Bhool Paayenge and No Problem. Last year, she made her comeback with the web-series Aarya, which is streaming on Disney+Hotstar. She was last seen as a judge in Fashion Superstar, alongside Manish Malhotra.