On Monday, Sunny Leone shared a video from her pool time and wrote: "Girls just wanna have fun" 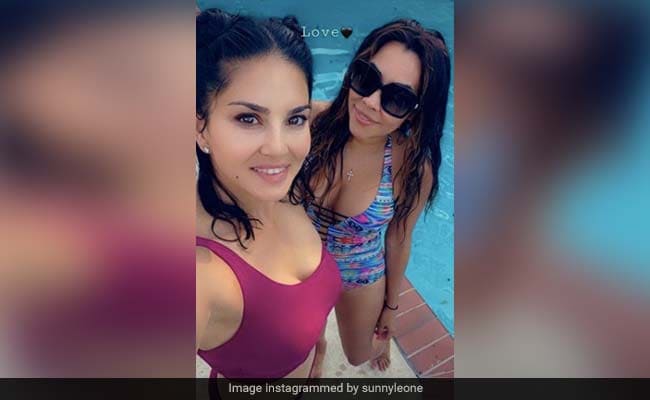 Sunny Leone has actively been sharing posts from her Los Angeles diaries on Instagram. The actress, on Tuesday, posted a picture of herself with a friend on the photo-sharing application. Dressed in purple swimwear, Sunny Leone can be seen smiling with all her heart as she poses with her friend. "Pool time," Sunny Leone caption the post. The actress splashed her way into the week by sharing a video of herself along with daughter Nisha and she wrote: "Girls just wanna have fun! Nuria Contreras and our beauty Nisha Kaur. More shenanigans tomorrow."

Check out the aforementioned posts here:

Girls just wanna have fun!!! @nuria.contreras and our beauty Nisha Kaur!! More shenanigans tomorrow!! Thanks Nuria for always having us over!

Sunny and Daniel Weber got married in 2011 and are parents to three children - daughter Nisha and sons Noah and Asher. The couple are currently staying in Los Angeles.

Can't thank them enough for teaching the kids about fire safety and also making them so happy. Some things in life are priceless and this moment was one of them. Selfless community helpers showing kindness to our family! Thank you station 88!! @dirrty99

3yrs ago you chose us...us to be your mama & papa...to trust us to take care of you...to show us what real love is...the second I laid eyes on you, I knew you were my daughter. Today I look at you and I see a glimpse of the strong independent woman you will become. After this year I know you will have many questions but I will be there every step of the way while we figure it out together. I love you Nisha and Happy "Gotcha" Day. You are the light in our lives and the reason for all our joy everyday!! @dirrty99 @bluereena @patellegrino @nuria.contreras @geege_on_video & Carrie

Explaining why she and her family had to move to Los Angeles during the coronavirus pandemic, Sunny, in an interview with Times Of India  earlier, said, "Personally, I was sad to leave Mumbai, and trust me, I didn't want to leave, which is why it took us so long to decide to come here. However, it was important for us to be around Daniel's mother and his family. Like everyone else, they wanted to be with their loved ones."