Vijay Deverakonda is awaiting the release of his film, Liger 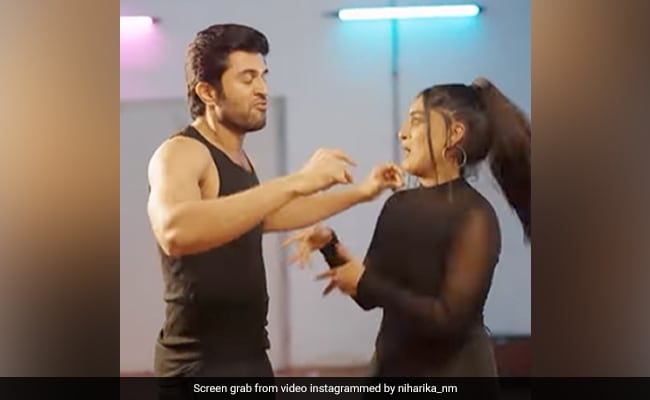 A still from the video. (courtesy niharika_nm)

Vijay Deverakonda may just be a day away from the release of his highly-anticipated film Liger, but he is not one to shy away from a fight. But who is he fighting, you ask? Well, going head-to-head with the heartthrob is digital content creator Niharika NM. Before you imagine the two young sensations getting into a full-blown fight, let us tell you that we are talking about Niharika's hilarious new video in which she is seen with Vijay Deverakonda ahead of the film's release. The clip begins with Vijay Deverakonda in his Liger avatar and Niharika preparing to “fight”, with each flaunting their physical prowess.

The two even show off some cool moves, channelling their inner fighter until Niharika meets Vijay's abs. And then things, not surprisingly, change. A punch changes into a hug as a surprised Vijay Deverakonda – channelling his Liger character – attempts to keep Niharika's affection at bay. Given the character's stutter, what follows is a comedy of errors with Niharika finding ways to insert flirtatious messages amid Vijay Deverakonda's threats.

The video ends with Niharika trying to sneak away from Vijay Deverakonda by crawling on the floor. But the actor manages to catch up to her.

Over the last several days, Liger stars Vijay Deverakonda and Ananya Panday have been travelling across the country promoting the film. The actors have also been sharing regular updates from their promotional spree on social media.

A week ago, while promoting the film in Punjab, the actors posed on a tractor parked amid a green field. In the caption, Vijay Deverakonda said, “When in Punjab.”

The team also promoted the movie in Gujarat, where Vijay Deverakonda was clicked enjoying a traditional thali. “The great Gujarati thali,” he said in the caption.

Liger, which also stars Ramya Krishnan, Ronit Roy and Mike Tyson, has been directed by Puri Jagannadh. Puri Jagannadh has also co-produced the film with Karan Johar's Dharma Productions. The film is out on August 25.