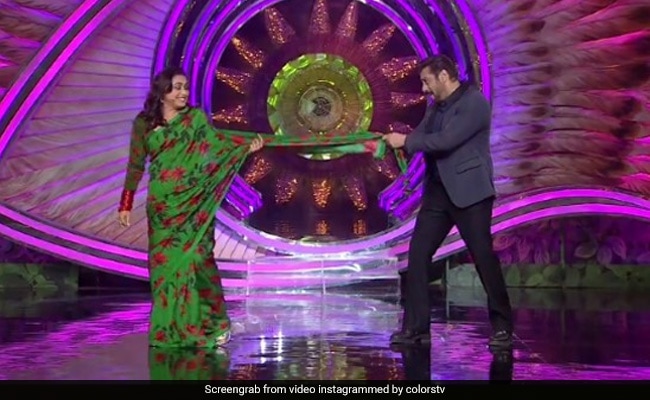 Rani Mukerji and Salman Khan have an on-screen chemistry that has impressed cinema lovers for decades now. Whenever they appear together, it is magical and things were no different when Rani Mukerji arrived on the sets of Bigg Boss 15 recently. The reality show is hosted by Salman Khan and features several notable television personalities. Rani Mukerji appeared on the show to promote her film Bunty Aur Babli 2. Now, a video released by Colors TV shows the two dancing together on the Weekend Ka Vaar episode to the song, Teri Chunariya Dil Le Gayi from their film Hello Brother.

The clip also shows them playing a game of “Guess The Word”, where Rani Mukerji has to guess what Salman Khan is saying when she has music blasting in her ears. When Salman Khan says the word “London”, Rani Mukerji seems appalled by what she thinks he said and asks, “Wahi bola (Did you say that)?”

The trailer of the film reveals that decades after they shocked the country with their con game, Bunty and Babli are now leading a quiet middle-class life with their son. But their simple life goes right out of the window when Siddhant Chaturvedi and Sharvari turn up as their imposters and pull off some damaging cons. The laugh riot also features Pankaj Tripathi as a cop.

Bunty Aur Babli 2 is directed by debutant Varun Sharma. The film produced by Aditya Chopra's Yash Raj Films is scheduled to release in theatres on November 19.

Meanwhile, Salman Khan will be seen in Antim: The Final Truth, with his brother-in-law Aayush Sharma. The film directed by Mahesh Manjrekar is scheduled to be theatrically released worldwide on 26 November 2021.