Not to miss, the film also stars Pankaj Tripathi as a cop and he adds a whole lot of fun to the trailer 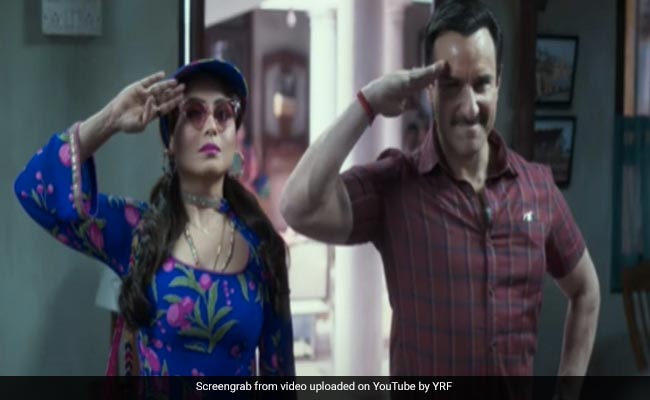 Finally. The much-awaited trailer of Bunty Aur Babli 2 is here and it is packed with powerful performances of Rani Mukerji, Saif Ali Khan, Siddhant Chaturvedi and Sharvari along with witty dialogues. Not to miss, the film also stars Pankaj Tripathi as a cop and he adds a whole lot of fun to the trailer of the film. Bunty Aur Babli 2 is a sequel to Rani Mukerji and Abhishek Bachchan's Bunty Aur Babli, which was one of the biggest hits of 2005 and starred the duo in the titular roles (more on that later). The trailer shows "OGs" Bunty (Saif Ali Khan) and Babli (Rani Mukerji) leading a dull and typical middle-class life with their son. Conman Bunty has now turned into a railway ticket collector. However, the duration of their simple life is cut short by Siddhant Chaturvedi and Sharvari, who are the new cons on the block.

They have been carrying out robberies and frauds disguised as Bunty and Babli and Saif Ali Khan-Rani Mukerji are not okay with this.

When confronted by a cop (played by Pankaj Tripathi), the duo realised someone is trying to "steal their original Bunty-Babli brand" and decide to get back into the game.

Bunty Aur Babli 2 is directed by debutant Varun Sharma and produced by Aditya Chopra. The original film showcased the story of two ambitious individuals, who conned people using the pseudonyms Bunty and Babli. Amitabh Bachchan played the role of a cop in the film.

Bunty Aur Babli 2 is another addition to Rani Mukerji and Saif Ali Khan's films together. Saif Ali Khan has stepped into the shoes of Abhishek Bachchan in the second part of the film.

The film is scheduled to release in theatres on November 19.