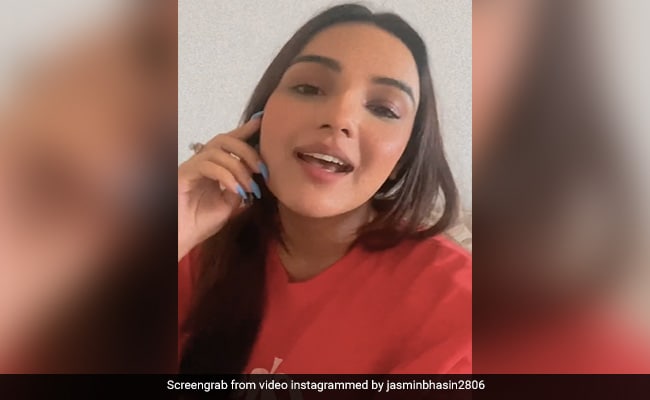 Actress Jasmin Bhasin has been winning hearts ever since she made her debut in 2011. And last year, with the reality show Bigg Boss, Jasmin has amassed quite the fan following for herself. In addition to her stunning looks, acting talent and cheery personality, the actress is also a favourite among fans for keeping it real on social media. And now the 30-year-old has shared an endearing Instagram Reels that has won her fans' heart. In the clip, the actress is grooving and lip-syncing to her favourite line from the Punjabi song Tenu Yaad Karaan which features Jasmin and singer-actor Gurnazar Chattha.

The song and the video trace the budding romance between Jasmin and Gurnazar's characters. In the clip on Instagram, Jasmin is lip-syncing to the lines, "Kal tere piche yaara, tere piche mainu, meri maa ne mena ditta; Oh tainu yaad karan ton alawa, main ajj koyi kamm hi ni kitta ( My mother taunted me because of you yesterday, I got no work done except missing you)." Confessing that these were her favourite lines from the song, she wrote in the caption, "My favourite line from the song. Tell me what's yours."

Recently Jasmin was also seen in another Reels with her boyfriend, actor Aly Goni. This time around the duo was seen dancing to Aly, a song dedicated to their relationship by the couple's Bigg Boss co-contestant Rahul Vaidya. The singer-songwriter had composed the song for the couple during the course of the show and released the song in May. Thanking Rahul for the song, Aly wrote, "This song will always hold a special place in our hearts, Rahul Vaidya. Thank you bro for this mind-blowing song."

Jasmin Bhasin made her acting debut with the Tamil film Vaanam. She followed this up with films in Malayalam and Telugu, before making her debut in television with the series Tashan-e-Ishq. She is best known for her work in shows such as Dil Se Dil Tak, Khatron Ke Khiladi and Big Boss.