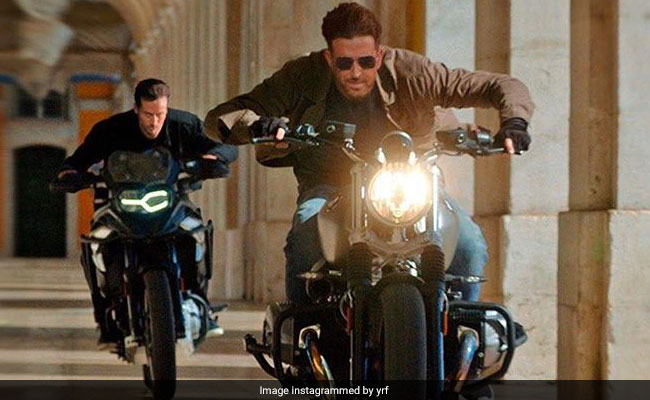 War, starring Hrithik Roshan and Tiger Shroff, is killing it at the box office with its 'fantabulous collection' now at Rs 238 crore, tweeted trade analyst Taran Adarsh. The Siddharth Anand-direction action film has enjoyed a blockbuster first week at the ticket window and the second week collections will determine its lifetime collection. Taran Adarsh wrote, "War has a fantabulous extended week 1... Fifth Hindi film to hit Rs 200 crore mark in week 1/extended week 1... Biggest opener for Hrithik Roshan, Tiger Shroff and Yahs Raj Films (crosses Sultan)... Week 2 is pivotal, and it will give an idea of its lifetime business." He also shared the day-wise break up the film's collection so far and the statistics also revealed that the film's Hindi version alone collected Rs 228.50 crore while adding the collections of the Tamil and Telugu prints makes War's box office total Rs 238.35 crore.

War, produced by Yash Raj Films, is the story of a rogue Indian intelligence officer Kabir, played by Hrithik Roshan, who is being hunted by his former mentee Khalid, played by Tiger Shroff. The film has stunning action scenes and gripping chase sequences, which have been shot all over the world.

Here's the trailer of War:

War sustained box office competition with Chiranjeevi's Sye Raa Narasimha Reddy and Hollywood biggie Joker - all three films released on October 2. However, this week's big release The Sky Is Pink may dampen the progress of War by a few shades.

The Sky Is Pink, starring Priyanka Chopra, Farhan Akhtar and Zaira Wasim, is the love story of Aditi And Niren Chaudhary, as narrated by their daughter Aisha, who is dying due to a Busulfan Lung Damage. The Sky Is Pink is based on the real life story of motivational speaker Aisha Chaudhary, whose life was cut short due to pulmonary fibrosis.

The Sky Is Pink is directed by Shonali Bose.