War Movie Review: Powered by two loose-limbed and resolutely stone-faced male leads, Hrithik and Tiger, War is all style and no substance. 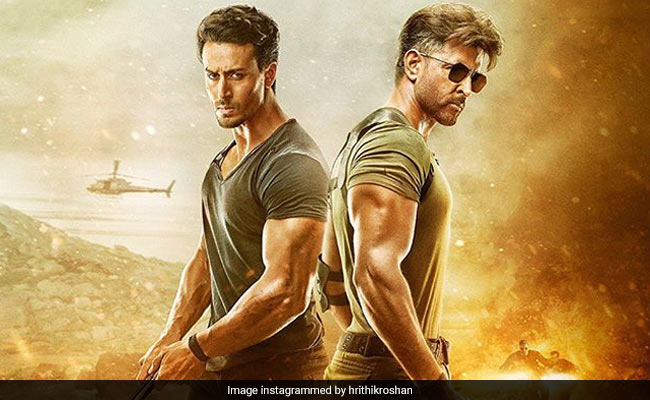 War Movie Review: Tiger and Hrithik in a still from the film. (Image courtesy: hrithikroshan)

One minor character in Siddharth Anand's War is a plastic surgeon who plies her trade in Zurich. She is the world's best, no less. But all she has in the film are a couple of fleeting sequences. She should have stayed longer, gone to work on this monstrous mess of a film and pared it down to its bare-bones essentials. But then, that would have added up to zip.

War is all sound and fury, a glossy globe-trotting thriller that goes haywire at every turn. It could have done with not just a major plastic surgery, but also several rounds of liposuction to rid it of its flab. That money has been generously spent in its making - it is a Yash Raj Films production after all - is obvious in the lavish mounting. Sadly, the screenplay (Sridhar Raghavan and Siddharth Anand) is terribly sloppy. It takes recourse to absolutely arbitrary twists in its attempts to get the jigsaw pieces to fall into the right places. They never do.

Powered by two loose-limbed, nimble-footed, buffed-up and resolutely stone-faced male leads, Hrithik Roshan and Tiger Shroff, War is all style and no substance. There is nary a scene in here that isn't persisted with longer than necessary. Especially overstretched are the gunfights, duels and stunts that are designed to hold the film together. Not one of them is remotely interesting, let alone exciting.

But this isn't meant to be criticism of the film's editor Aarif Sheikh. When he has the opportunity, which sadly isn't often, he demonstrates exceptional skill. In an early scene, one of the leads struts across the screen from left to right in what turns out to be an equivalent of a wipe that leads into an aerial shot of Connaught Place, Delhi.

You begin to expect War to be a lean and mean soldiers-and-spies drama only to have your hopes dashed. War settles into a series of long-drawn-out action set pieces and contrived plot sleights designed to give Hrithik and Tiger the room to go all out. Parts of War are reminiscent of Bang Bang. That isn't surprising at all: Bang Bang also scoured over the world, was helmed by Siddharth Anand and was shot by cinematographer Benjamin Jasper.

The director of photography is bang on the money no matter where War takes him: from Valetta, Malta and Marrakesh, Morocco to the backwaters of Kerala and the Arctic Circle. But lush images, eye-popping locations and two of Bollywood's hunkiest actors are hardly enough to conceal the gaping holes that riddle the film. Seriously, a spy thriller that has to turn to a plastic surgeon for the purpose of springing surprises can only be painfully plasticky and pulpy.

In the opening sequence, an Army soldier and undercover agent Kabir (Hrithik Roshan), sent out to Syria to eliminate a terror mastermind, turns his gun on the very Indian intelligence officer he is receiving commands from. Khalid Rahmani (Tiger Shroff) is handpicked by the spy agency chief, Colonel Luthra (Ashutosh Rana), for a mission to neutralize the rogue.

Khalid - his religious identity isn't emphasized either by way of visuals or spoken lines except when his mother (Soni Razdan) talks of the power of prayer - has several handicaps to reckon with. One, he has to work much harder than anyone else to prove his love for the nation because of a past family blot. Two, he has a blind spot in his right peripheral vision - a result of a bullying incident in school - and nearly loses his spot on the crack anti-terrorism team that Kabir grooms for a major operation.

When Kabir finally accepts Khalid wholeheartedly, the film takes a brief detour and treats the audience to a Holi number on a set erected on the edge of a cliff. The song has no reason (barring the obvious) to be in the film: it is a showcase for the dancing abilities of the two principal actors. As they belt out Jai jai Shiv Shankar aaj mood hai bhayankar, they are great to watch if its complete redundancy does not bother.

Four chess pieces - rook, bishop, knight and pawn - are repeatedly mentioned in the second half of the film to explain why Kabir has turned against his own men, but it is in the first half itself that several major moves are made. As a consequence, when the supposedly crucial reveals occur later in the film, they do not stir any emotions because they have already been amply, and overtly, telegraphed.

The war on the screen turns murkier - and muddier - as faces are changed, identities are switched and all logic is merrily thrown to the wind. A super-smart intelligence agency analyst, Aditi (Anupriya Goenka), feeds Kabir all the dope that he needs to stay ahead of his opponents, who are both within the country and elsewhere in the world. But the war he wages is too scrappy to hold up for long.

Post-interval, War takes a pause of sorts to bring us up to speed on Kabir's immediate past. This exercise hinges on two scenes. The first one has the protagonist lecture a six-year-old girl on winning and losing and on the importance of giving off your best no matter what the final result is. Kabir takes the philosopher act a few notches higher in the next significant scene - this one has a dancer and single mom Naina (Vaani Kapoor in an extended cameo), who repays him in kind and pontificates on the perils of being enlisted as "a civilian asset" by a spy.

As soon as the next gunshot is fired, War returns to the core business of violent confrontations that push the combatants to the limits of their ability to endure pain. They test the patience of the audience too. This War is just not worth fighting. It begins with a bang and ends with a bang, but is otherwise a whimper all the way. Only for fans of Hrithik and Tiger.